The 2nd International Symposium on Drug Policy and Public Health is organized by the Turkish Green Crescent Society and will be held in Istanbul in 26-27 November 2018.

The organising committee of the symposium are keen on building upon the success of the first symposium, which was held in 2014 hosting 1270 participants and 85 speakers from 65 countries and international organisations, including from WHO, EMCDDA, UNODC, and had high level attendance from the Turkish government with the Turkish President’s opening plenary session.

The Turkish Green Crescent Society is a national non-governmental organization that works in the areas of addiction, such as tobacco, alcohol, drugs and gambling. The Society is engaged in activities related to advocacy, primary prevention and rehabilitation for addictions since 1920. 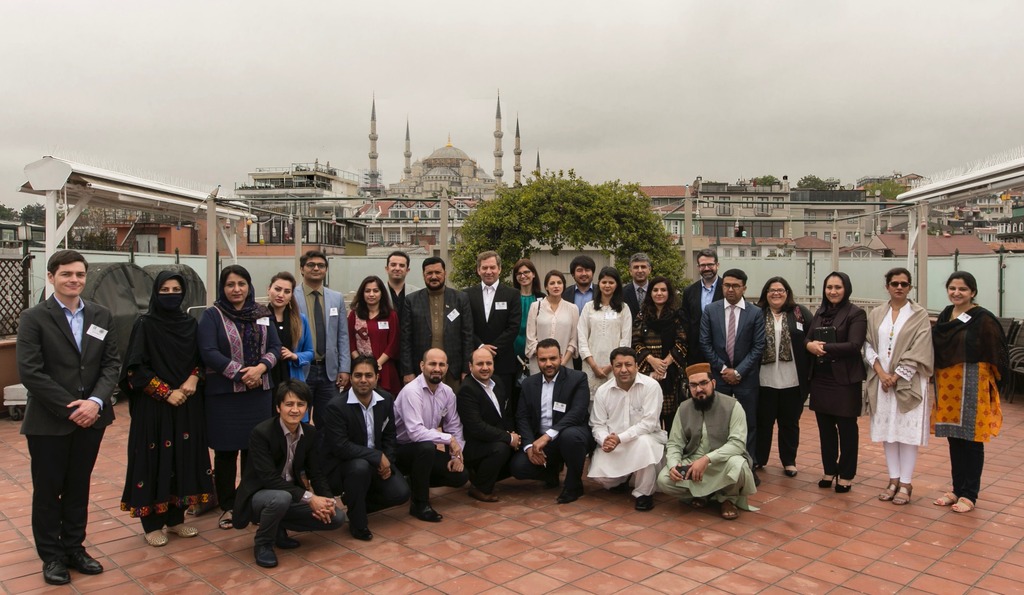 The Afghanistan – Pakistan Partnership Summit: Workable Solution for the New Era organized by the Hollings Center for International Dialogue and supported by the U.S. Embassy Kabul, Afghanistan took place May 4 - 8, 2018 at the Armada Hotel in Istanbul, Turkey.

About 25 participants including representatives from the Media, Civil Society, Academia and Business participated in the five days summit from both countries. The focus of the gathering was to highlight opportunities for partnerships among the two countries in the areas of Media, Social Sector, Academia and Business to improve relations at the public level.

Participants arrived throughout the day. Some of the participants from Afghanistan and Pakistan arrived later during the day. A Reception and refreshment was organized at the roof top of the hotel by the Hollings Center. Initial informal introductions among the participants took place on the first day of arrival.

After formal introduction of participants of the event, the participants were briefed about the goal of conference. The tone was set by briefing the participants about the process and event. The first day was moderated by Mr. Michael Carroll, Executive Director of the Hollings Center in Washington, DC.

The session was initiated with a presentation of 10 minutes from one representative of each side. During the session the speakers from both sides highlighted the public perceptions on both sides of the border. After each presentation, participants were given time to ask questions and provide comments and the floor was open for broader discussion. During the sessions it was observed that due to a gap, history and so many other reasons serious misconceptions have generated in the public on both sides.

The following points were also discussed during the session: Security challenges, drugs problem, refugee issues, border disputes and the role of other international actors are some of the major issues that have an impact on the Afghan-Pakistani relationship. What are widely-held views on both sides about these challenges? What are some of the solutions that are raised in public that could provide a framework for an improved bilateral relationship?

The session was moderated in a similar manner as set at the beginning of the day, where after having 10 minutes presentations from each side the floor was opened up for discussion.

The following points were discussed during the session: Many opportunities in and barriers to building economic and business relations between Afghanistan and Pakistan exist. What are some non-conventional methods to building economic relations between the two countries? What role can entrepreneurship and social innovation play to enhance opportunities between Afghanistan and Pakistan? What are some examples that exist? What barriers are there to further develop these newer forms of businesses? How can these barriers be overcome?

During this session representatives of Civil Society Organizations from both Afghanistan and Pakistan were given the opportunity to showcase their services. Each organisation was given ten minutes and participants were allowed to ask questions regarding the services at the end of the session. Pakistan based CSO’s specifically highlighted their services for Afghan Refugees, youth and vulnerable population.

The Role of the Media:

During the session two media representatives from both sides had ten minutes to present the role of the media in the current situation. They also briefed the participants about problems, challenges and opportunities for media in improving the relationship between the two countries.

After each presentation the floor was opened for discussion and great discussion was generated among the participants.

The following points were discussed during the session: A recurring theme at the pre-orientation meetings was the role of the media in fostering distrust between Afghanistan and Pakistan and also the positive role it can play to eliminate the trust deficit between the two countries. What has been the role of conventional and social media in Afghanistan - Pakistan relations? What are some specific steps the media can take to change public perceptions?

During this session one youth led organization from each side was given the opportunity to present their activities. The session was greatly anticipated by the participants as some of the organizations had great experience in engaging youth in Pakistan. I had also given my presentation about my journey starting at the 6th Asian Youth Congress (AYC) in Bali, Indonesia in 2008 at the Afghanistan-Pakistan partnership summit. The Youth Congress was organized by Colombo Plan, supported by INL, the U.S. Department of State’s Bureau of International Narcotics and Law Enforcement Affairs. This was a major breakthrough in my career from where I channelized my motivation and activities in the field of drug prevention and youth empowerment. Having the support of INL, U.S. Department of State, I have been to different countries, and engaged in different drug prevention and youth empowerment programs mainly in: Pakistan, USA, Turkey, Indonesia, Bhutan, Afghanistan, Thailand, Malaysia and Sri Lanka.

Currently, I am serving as an Exchange Ambassador with the U.S. Embassy in Pakistan as a Youth Coordinator for DFPF at DFPF, I lead one of the biggest youth development project for PYC, where I have engaged Pakistani youth throughout Asia for many years. Credit goes to INL- U.S. Departments of State and Colombo Plan especially my mentor Mr. Brian A. Morales for his moral support and guidance throughout my career path in the field of drug prevention and youth empowerment from the local level to the global level. The following points were discussed during the session: What are the current trends among young people in both countries? What are some uniting values to mobilize youth around? How can youth overcome the negative narratives passed on from previous generations and what fresh perspectives can they provide for improving mutual perceptions and opening new avenues of partnership?

Each session/group was facilitated by a host from the Hollings Center. After introduction the participants were divided into four groups.  Each group also had representatives from both sides and different walks of life. The groups were asked to discuss the points in detail and see if they can work on any specific theme.

The following points were discussed during the session: a) Public Perception and Misconceptions b) Social Entrepreneurship c) Media.

During the plenary session groups were again sent to different halls for further discussion and preparation of a joint project. A briefing on proposed projects including time line, budget and other requirements was done.

All the groups presented their proposed project prepared during the previous sessions. Groups received feedback and suggestion from other groups. These suggestions were also incorporated in the plan later.

Additional info:
Submitted on22 May 2018
Events