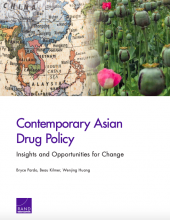 Countries in Asia have typically addressed illicit drug supply and use with harsh punishments, including compulsory treatment and the death penalty. The region has long espoused the goal of creating a drug-free society, a goal that has been abandoned in other parts of the globe for being infeasible. Like many other places in the world, there are emerging discussions in Asia about policies to reduce drug use and trafficking.

This report aims to help inform policymakers and the public by describing the illicit drug situation for selected Association of Southeast Asian Nations + 3 countries (China, Japan, and South Korea). The authors present three case studies related to the shifting drug and drug policy landscape in Asia:

(1) the crackdown on drug users and sellers in the Philippines,

proving access to medication treatment and needle exchange, and

(3) China’s emergence as a major source of many new chemical precursors and drugs that are exported outside Asia.