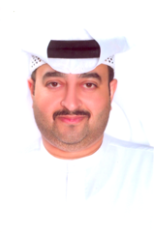 is the Director General and the Head of the WHO Collaborative Centre for substance use prevention and treatment of substance use disorders (National Rehabilitation Centre Abu Dhabi). He received his medical degree from the Faculty of Medicine, Jordan University of Science and Technology in 1999 and his Masters in Public Health from Tulane School of Public Health and Tropical Medicine, Tulane University, USA in 2002. He obtained his PhD from the Faculty of Medicine, University of Aberdeen, United Kingdom in 2013.

Dr Hamad Al Ghafri serves in many national and international bodies. He is the Head of Higher Committee for Treatment, Rehabilitation and Social Re-integration and a Board Member of Anti Dugs Council in the UAE. He is also a member of the Advisory Board of the College of Medicine and Health Sciences of the United Arab Emirates University.

Internationally, he is the Vice President of the Arab Federation for Drug Prevention since 2005.  He was a member of the Management Board that established the new journal the International Journal of Prevention and Treatment of Drug Use Disorders (IJPTSUD). Under his leadership, this was re-launched as the International Addiction Review (IAR) in 2017. He is a Mental Health Advisor to the Eastern Mediterranean Regional Office (EMRO) of the WHO and Chair of the Technical Advisory Group (TAG) of UNODC and WHO. He is a Board member of the International Society for Addiction Medicine and was the chair of the local organizing committee of ISAM 2017 conference and a Board Member of the International Consortium of Universities for Drug Demand Reduction (ICUDDR).  He is also Emeritus Professor at the Faculty of Medicine, Jordan University of Science and Technology, Jordan and Adjunct Professor at College of Medicine and Health Sciences, United Arab Emirates University. From 2016 to 2018 was the Chair of the Commissioners of the Global Centre for Credentialing and Education of Addiction Professionals (GCCC) of the Colombo Plan.

His research interests include public health aspects and prevention of addiction, particularly in Arab countries. He has published widely in these areas.  He has a particular interest in promoting research in the developing world and dissemination of research information.

In recognition of his contribution to his field and the country, Dr Hamad Al Ghafri was awarded the Sheik Rashed Award for Science and Culture in 2003 and 2014. In 2017, he was awarded the honour of Lifetime Membership of the American Society for Addiction Medicine.