National Media Conference on the Role of Media for Drug Free Society by ISSUP Pakistan Chapter and Ehsas For Life/NGO, in Collaboration with Youth Forum Pakistan & Anti-Narcotics Force, Punjab on 23rd September, 2020 at Faletti's Hotel, Lahore-Pakistan. 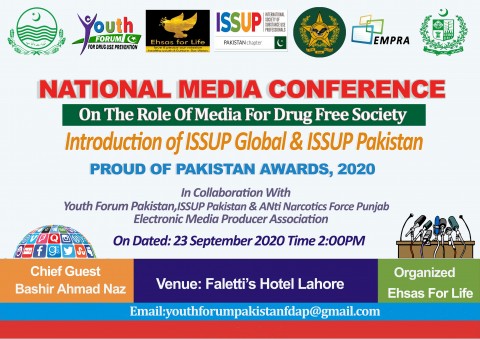 Media has today become the voice of our society. Media is the reflection of our society and it depicts what and how society works. It also helps in entertaining the public, educate and make people aware of the current happenings. There is a variety of media platform that has stimulated the thoughts of the young generation and other sections of our society, more eloquently. Over the past three decades, peoples have been heavily influenced by the power of media and it's ability to shape society. Public health educators are using the mass media as a primary vehicle for messages against substance abuse for the past twenty-five years.

By acknowledging the important role of media in shaping the societies, ISSUP Pakistan Chapter and Ehsas For Life/NGO in collaboration with Youth forum Pakistan (For Drug Use Prevention) and Anti-Narcotics Force Punjab going to Organize ‘’National Media conference’’ on (The Role of Media for Drug Free Society) on 23rd September, 2020 at Faletti’s Hotel, Lahore-Pakistan.

The main purpose of this conference is to explore the ways, how mass media can be used more effectively to prevent substance abuse, especially among preteens and adolescents. The media has come to play an increasingly important role in public campaigns due to its wide reach and ability to influence behavior. It has contributed to positive development like in the fight against HIV/Aids, gender bias, poverty and racism.

And now there is an urgent need to use the full power of the same media to educate and enable Pakistani youth to shun substance abuse and illicit drugs. This includes preventing drug abuse, encouraging current users to quit and exposing illegal trade in drugs.

Programme will start with the introduction of ISSUP Global and ISSUP Pakistan and Media Persons, SUD Treatment Professionals, Government Officials, NGO Representatives, Students, Celebrities from Showbiz Industry and Civil Society from all across the country are also invited for this event so we’ll able share our mission among more people and motivate them to work with us hand in hand to make our society Drug Free and then Programme will be ended with Award distribution Ceremony.