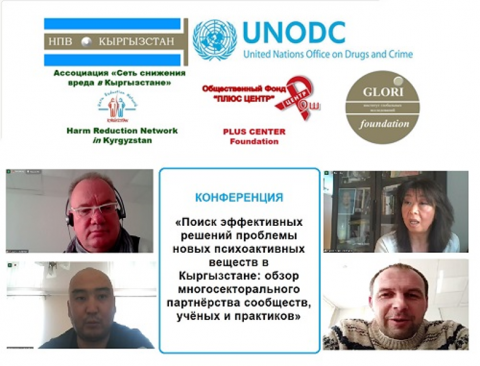 New psychoactive substances (NPS) are spreading at an unprecedented rate and are becoming a serious health threat and a real problem in drug policy in Central Asian countries. Little is known about the negative impact of NPS on human health and the harm they cause to society, and this significantly complicates prevention and treatment. To effectively counter this new problem, it is necessary to ensure constant monitoring of the drug situation, exchange of information and raise awareness of the risks.

In order to consider the possibility of multisectoral partnerships between government agencies, nongovernmental organizations, academic institutions and research centers on studying the situation with NPS and improving the availability and efficiency of services for people who use NPS, the UNODC Program Office in the Kyrgyz Republic, together with the Harm Reduction Network Association, the Plus Center Public Foundation, the Institute for Global Research (GLORI) and financial support from UNAIDS Country Envelopes Fund held a conference “Finding Effective Solutions to the Problem of New Psychoactive Substances in Kyrgyzstan: An Online Review of Multisectoral Partnerships of Communities, Scientists and Practitioners”.

Some 46 experts, specialists and representatives of international organizations of Central Asia countries learned on the NPS situation in the country and in region as well as discussed issues on improving access to treatment and effective services for drug users.

In the Kyrgyz Republic, first cases of synthetic drug use were recorded in 2013. Back then synthetic cannabinoids appeared on the market - smoking mixtures known as “spice”, the use of which was widespread, especially among young people. Only in 2015, Kyrgyzstan adopted a law prohibiting the abuse of synthetic drugs, including "spice" and other smoking mixtures. But the emergence of new synthetic drugs such as "salts", "bath salts" and "crystals" requires their inclusion into the list of illegal substances. In 2014, more than 400 NPS were identified, and in 2020 there are already more than 800.

“During the conference, I would like to focus on a very important point: the legality of NPS,” said Mr. Timur Isakov, Executive Secretary of the State Coordination Committee for the control over narcotic drugs, psychotropic substances and precursors (SCCDC). “Currently, these substances exist in the form of new psychoactive substances, they are legal and cannot be withdrawn from a citizen or organization. Their distribution is legal. Let us, in legal terms, say not that they need to be seized, but that they need to be identified. "

Considering the situation, in 2015 an interdepartmental working group under the SCCDC was established, which resulted in introducing additional substances into the prohibited lists. “You can control the spread of NPS in a different way. First, at the global level. But this system is not fast. Therefore, a number of states have started to group NPS as forbidden substances. But in the country, we do not adhere to this position, since in Kyrgyzstan there is a very strict law on NPS. In this regard, we form lists of analogues, now we are also doing such work in order to comply with the norms that are laid down in the Criminal Procedure Code and the Criminal Code of the Kyrgyz Republic. The main task is to identify new psychotropic substances”, concluded Mr. Timur Isakov.

The head of the Harm Reduction Network Association, Mr. Sergei Bessonov, raised the issue of the distribution of NPS in the territory of Kyrgyzstan. In his opinion, the appearance of NPS on the country's market was influenced by a number of factors: close borders with China and Afghanistan, their availability, contactless distribution through instant messengers: Telegrams and Internet resources. He concluded that “traditional prevention programs will not work on people who abuses NPS. Provision of prevention services/treatment over the Internet is the future for a new generation of drug abusers”. 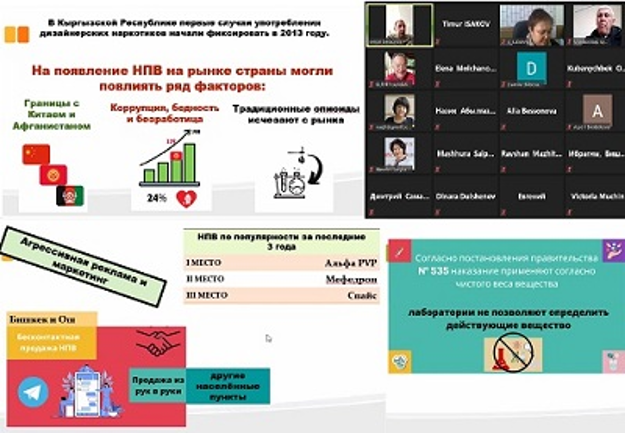 To organize the provision of medical, psychological and social assistance to NPS abusers from the moment of suspicion or diagnosis, in 2019 UNODC initiated a study, which resulted in the development of the Clinical Guidelines for Assisting Adult Abusers of New Psychoactive Substances and a new Clinical Protocol on NPS, which in the near future will be introduced into the work of medical institutions.

“I hope this clinical guide will be a useful practical tool for our physicians. We launched all this on time, as I see alarming signals - young people in Central Asia are beginning to quite actively switch to new psychoactive substances, especially Mephedrone. This substance is a synthetic psychostimulant - an analogue of amphetamine. And the problem is that now there is no way to help with such addiction”, said Mr. Kubanychbek Ormushev, Coordinator of the Drug Prevention Program at the UNODC Program Office in the Kyrgyz Republic.

Mr. Danil Nikitin, director of the Institute for Global Research (GLORI), said that during focus groups meetings, drug addicted girls and women complained that their relatives, friends did not notice that they had been addicted for a long time. When this happens, their relatives begin to treat them in every possible way. And sometimes this treatment can be attributed to domestic violence. In this regard, the WINGS model, which began to be applied back in New York, is indicative. There, drug addicted women themselves were able to mobilize and develop for themselves some kind of motivation and goal setting.

The result of the conference was the conclusion that the trend of the spread of NPS in the Kyrgyz Republic and Central Asia, in general, continues to grow, overshadowing traditional drugs. However, this creates a problem of ineffectiveness of the existing prevention measures for drug dependence as well as their treatment. And these issues require a separate study.

The event was conducted as part of the UNODC Program Office in the Kyrgyz Republic initiative "Assessment of the needs and accessibility of HIV prevention and treatment services for people in Kyrgyzstan who abuse new psychoactive substances and stimulants" implemented by Sub-program 3: Prevention, treatment, reintegration and prevention of HIV infections of the UNODC Program for Central Asia for 2015-2021.