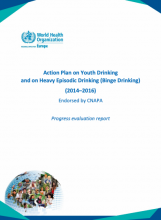 On 16 September 2014, European Union (EU) the Member States, represented by the Committee on National Alcohol Policy and Action (CNAPA), endorsed the Action Plan on Youth Drinking and on Heavy Episodic Drinking (Binge Drinking) (2014-2016).

The Action Plan was intended to complement the EU Strategy to Support Member States in Reducing Alcohol-related Harm and to provide a means to strengthen long-standing policy implementation work from the Member States in the area of alcohol while addressing key identified areas, namely youth drinking and heavy episodic drinking (HED).

In an EU-funded assignment to the World Health Organization (WHO) Regional Office for Europe to evaluate the activities that took place during the period of the Action Plan, this report focuses on the 20 operational objectives that make up the plan’s six action areas, using seven different data sources.

As agreed by CNAPA at its 20th meeting in Luxembourg on 22 March 2017, the Action Plan on Youth Drinking and on Heavy Episodic Drinking was extended until 2020.

Hence, the present report may be regarded as a midterm or progress evaluation.