Webinar: The risks of marijuana use and emerging tobacco products in adolescence 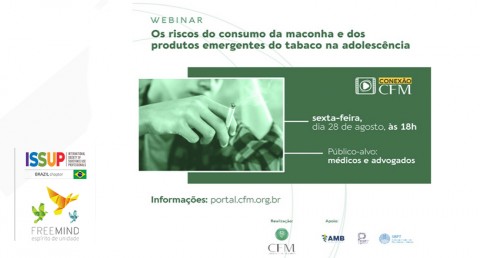 The risks of marijuana use and emerging tobacco products during adolescence will be the subject of the next webinar of the Federal Council of Medicine (CFM). Next Friday, August 28, the eveof The National Day to Combat Smoking, the event will be held through the CFM YouTube channel, promoting an online debate. The meeting will target doctors and lawyers.

Organized by the Cfm's Lawful and Ilic drug control commission, the webinar will also discuss the challenges faced to control tobacco use and devices such as electronic cigarettes, hookah and heated tobacco, as well as the losses associated with consumption by adolescents.

In Brazil, the number of smokers has reached a significant reduction over the last decades, from 32% of the population in 1989 to 9.3% in 2018. Smoking, however, continues vigorously around the world, thanks to aggressive industry strategies for promoting new products.

During the CFM webinar, Alberto José de Araújo, president of the Commission against Smoking of the Brazilian Medical Association (AMB) and coordinator of the Working Group (WG) on Licit and Illicit Drugs of the Regional Council of Medicine of Rio de Janeiro (Cremerj) will discuss the points presented at the event with the public defender of the State of Paraná, Bruno Muller Silva.

The event will take place this Friday, from 18h, on the CFM channel on YouTube.

Participation is free of charge. Just access the link: www.youtube.com/user/cfmedicina

The risks of marijuana use and emerging tobacco products in adolescence

Christina Hajaj Gonzalez, federal counselor and coordinator of the Commission for The Control of Licit and Illicit Drugs of the Federal Council of Medicine (CFM).

Theme The risks of marijuana for young people - João Paulo Becker Lotufo, pneumopediatrician, member of the Cfm's Commission for The Control of Licit and Illicit Drugs and Responsible for the Drug Prevention Gt of the Brazilian Society of Pediatrics (BpS).

Theme: The risks of the use of hookah for young people - Maria das Graças Rodrigues de Oliveira, pediatrician of the Medical Association of MG and member of the Commission to Combat Smoking of AMB.

Theme: The risks of electronic cigarettes and heated tobacco for adolescents - Gustavo Zabert, pulmonologist, president of the Asociación Latinoamericana del Tórax (ALAT) and member of the Board of Directors International Respiratory Societies (IRS).

Bruno Muller Silva, public defender of the State of Paraná.