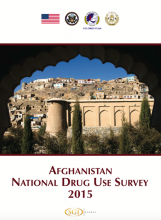 This five year survey is a global model for its rigor – the only national prevalence survey that I know of in the world where questionnaires were combined with 100% toxicology testing of three biological samples per person (hair, urine, saliva) and 10 panels of drugs, resulting in over 30,000 toxicological tests covering 75% of the country’s urban centers and 52 villages in most provinces.

2) A long-term study to test children in six treatment centers.

3) A special study of drug use in two villages in Kaldar district of Balkh province.

[1] The lower figures reflect Afghanistan’s official population estimate, while the higher amount represents CIA World Factbook population data.  These numbers include infants, children, and adolescents.  By comparison, the 2012 U.S. National Survey of Drug Use and Health estimates 2.6 percent of the U.S. population use opiates, which includes the illicit use of prescription drugs.