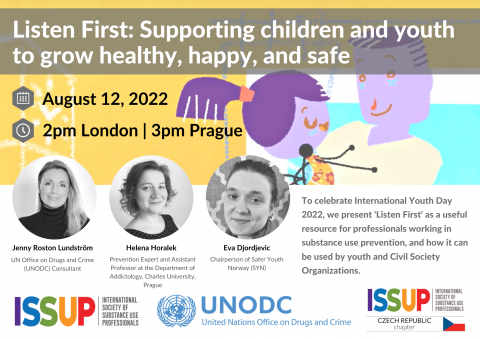 The United Nations Office on Drugs and Crime (UNODC) will present an update on the 'Listen First' initiative, with a contribution from a youth member on their experience. ISSUP Czech Republic will follow with a contrast and compare presentation on their dealings with youth in the Czech Republic.

Jenny Roston Lundström, UNODC
As a UNODC Consultant, Jenny coordinates the dissemination, outreach, and partners' engagement around the global campaign 'Listen First,' an initiative started by the UNODC Prevention, Treatment, and Rehabilitation Section to increase support for science-based drug use prevention worldwide. She is also the producer and co-owner of Ethan Films, the film production company that created the 'Listen First' materials since 2016. Jenny has fifteen years of professional experience working in the international field of human rights and film production. She has produced and provided research for documentary and fiction projects for television broadcast and cinema, numerous films, and public service announcements for organizations such as the United Nations TV, OHCHR, UN WOMEN, UNODC, CTBTO, and UNISDR, amongst others. She has also worked extensively with Civil Society Organizations in Europe and South Asia, and worked within international human rights mechanisms, as a previous NGO Human Rights Officer. Jenny has a master’s degree in Human Rights from Lund University, Sweden.