Prevention, Treatment and Epidemiology
Back to 2020: Drug Demand Reduction in Africa main page 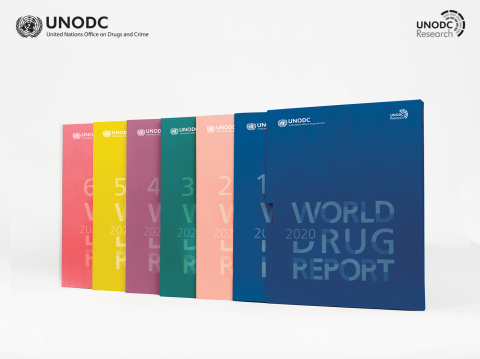 Drug use around the world on the rise says report. Population growth and urbanisation driving factors but poorest continue to suffer the largest burden of disorders. Plant-based substances such as cannabis, cocaine and heroin have been joined by hundreds of synthetic drugs, many not under international control.

The report reveals that around 269 million people used drugs worldwide in 2018 - 30 per cent higher than in 2009, while over 35 million people suffer from drug use disorders.

The Report also analyses the impact of COVID-19 on the drug markets including how border and other restrictions linked to the pandemic have already caused shortages of drugs on the street, leading to increased prices and reduced purity.

Cannabis was the most used substance worldwide in 2018, with an estimated 192 million people using it worldwide. It also remains the drug most likely to bring people into contact with the criminal justice system, accounting for more than half of drug law offences cases, based on data from 69 countries covering the period between 2014 and 2018.

Opioids, however, remain the most harmful with the total number of deaths due to opioid use disorders up by 71 per cent over the past decade.

Drug use among developing countries has risen rapidly over the 2000-2018 period. Adolescents and young adults account for the largest share of those using drugs, while young people are also the most vulnerable to the effects of drugs because they use the most and their brains are still developing.

The report warns that poverty, limited education and social marginalization remain major factors increasing the risk of drug use disorders. vulnerable and marginalized groups may also face barriers to getting treatment services due to discrimination and stigma.

The World Drug Report and further content is available here.

The influence of narcotics is very large on life and due to economic factors so that an addict becomes very dependent on narcotics which will have a negative impact. so that it is deemed necessary to regulate other addicts.