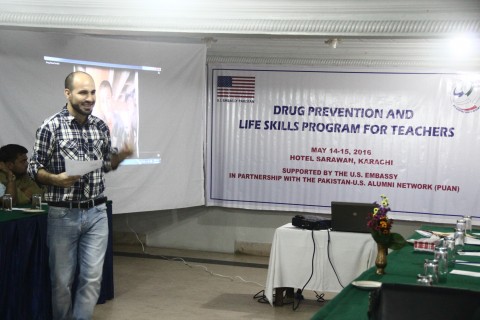 On the 14th – 15th May, 2016 and on the 21st – 22nd of May, 2016 Ahmad Shah, PUAN Alumni and Emerging Leader Pakistan Fellow-2012, organized drug prevention and life skills education programs for teachers from various public and private schools. The program aimed to train teachers on how to educate their students about drug prevention and to instill vital life skills in their students in order to survive and succeed in today's competitive world. Great importance was put on the role of teachers in student’s career building, understanding their unprecedented and pivotal role in transforming society.

The training was divided into four main sessions on topics pertaining to child psychology, the danger that drugs pose, breaking stereotypes about drug addicts, causes of drug abuse, advising on quitting drugs and live stories on experiences with addicts as a way of picking up early signs of potential addicts. The participants engaged in interactive activities where they identified major drugs being used in their areas and the underlying causes of their prevalence.

The best part was that the participants belonged to diverse backgrounds including teachers, nurses, psychologists and a considerable number of Afghan refugee teachers which added new dimensions to the discussions and debates being conducted. One participant who is a national level sports player told us about how he too was indulged in drugs in his early career as it was a requirement of his profession, but later realized how dangerous of a habit this is and therefore quit drugs. We also had the honor of having a speaker who quit taking drugs after 16 years of using them. His personal stories really helped us gage a true picture of what addiction looks like, how difficult it is for individuals and how society mistreats and misunderstands addicts, only worsening the situation. Individuals who start taking drugs for the sake of achieving that heightened pleasure actually continue with it to avoid the pain of the withdrawal symptoms. By the time they realize what they have done, they are already so entrapped in this web and their brains have already undergone certain irreversible chemical changes that even if they try to, they cannot quit as easily as they could have in the initial phases of drug abuse. Learning about the biological basis of addiction really helped the participants to empathize with such individuals and debunk the stereotype of addiction being a “character weakness.”

Moreover, teachers were educated on what role they should play in the classroom to avoid the development of such habits within children. Teachers were encouraged to take an appreciative approach and to motivate children rather than scold or demotivate them. This helps children develop feelings of self-worth and confidence. Teachers are responsible for creating a safe and interactive environment for students where they can be open about their problems with the teachers and are able to develop essential life skills of effective communication and interacting with others. This is important because a major reason for people getting involved in drugs is failure to maintain healthy relationships with family, friends and society in general. As a result such individuals end up forming a relationship with drugs. Therefore, it is the duty of teachers to instill the importance of forming effective and healthy relationships in their students.

We successfully trained 80 teachers from public and private schools which included approximately twenty percent Afghan refugee’s teachers with the hope that they will disseminate the learning in the larger teacher community and will take measures for implementing what they learnt in their classrooms.

Six drug awareness programs for students were organized in the most vulnerable areas of Karachi Lyari, Korangi, Sultanabad and Side area with the support of teachers who participated in our teachers training program. To create awareness among students about the hazards of soft drugs, different videos were played regarding the making and dangerous effects of Pan, Betel Nut and Gutka. These videos left a long-lasting impact on students as the videos showcased real life scenarios which resonated with some students in the awareness programs. The students participated actively, accepted the fact that drugs are not good for their health and should not be used in any form. The students were surprised to see the horrible effects of Gutka and similar drugs that can cause oral cancer and can turn a happy and healthy person into a weak and disturbed one. Additionally, animated videos showed the effects of pan, chalia, gutka, shesha and cigarettes with a message of quitting them. Motivational songs and stories shared with students to keep their interest maintained and to enable them to understand the causes and effects of drug addiction were also part of the awareness program. Quiz sessions were also conducted in each program to make the learning impactful and to capture the interest of students. Gifts were distributed among the students who had given the right answers.

Impact: At the end of every program, students were so motivated that they threw out all sort of soft drugs from their bags and they made an oath that they would not use any soft drug and would also inform their family and fellows regarding the hazards of drugs on their personal and social life. The students participated with keen interest and shared stories of their relatives who used soft or hard drugs and as a result some had deteriorated their health or had lost their lives. They realized the importance of their own health and assured us that they would find their anti-drug in life to prevent themselves from any sort of addiction. They were highly motivated after the program and made a promise to propagate their newly-aquired knowledge among their parents, friends and other family members.

Were any problems/challenges encountered? How were they solved?

The biggest challenge was urgent announcement of long duration summer holidays. The teachers training programs were implemented before the holiday break and the long gap between the teachers and students awareness program created difficulty in delivering the message in an effective way. We overcame this challenge by recalling the learnings of our teachers training program with the teachers prior to implementing the school awareness programs. There were a few other challenges like unexpected power failure, security concerns in lyari and technical difficulties, but these issue were effectively overcome with the support of local community members and volunteers.