ISSUP Lebanon Launch and Webinar: UNODC and WHO - International Standards on Drug Use Prevention

Beirut, Lebanon, 21 September 2020
Content from this event is available in the Knowledge Share
Name of Speaker
Giovanna Campello 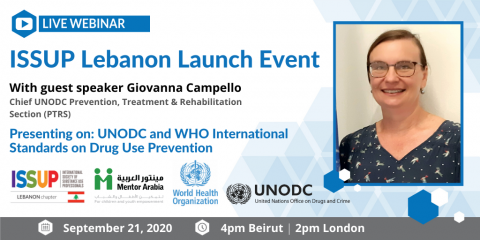 As part of their launch, ISSUP Lebanon wish to invite you to attend a webinar on the 'International Standards on Drug use Prevention' on September 21st 2020. The presentation will discuss evidence-based prevention of drug use according to the UNODC-WHO Second Updated Edition of the International Standards. The participants will learn about which interventions have been found to be effective in preventing drug use and other risky behaviours according to scientific evidence and as summarised in the Standards.

Ms Giovanna Campello has more than 20 years of experience with the United Nations Office on Drugs and Crime in supporting the Member States and stakeholders at all levels in improving their drug prevention response, applying and contributing to scientific evidence. Most notably in this context, she has led the publication of the International Standards of Drug Use Prevention in 2013 and the UNODC/WHO second updated edition in 2018. Since 2016, she has been leading the Prevention, Treatment and Rehabilitation Section of the United Nations Office on Drugs and Crime, thus promoting evidence-based, gender and human rights sensitive practice on drug prevention, treatment, care and rehabilitation, as well as access to controlled drug and medical purposes.
Ms Campello has Bachelor of Science in International Relations from the London School of Economics and Political Science and a Master of Arts in Gender and Development from the Institute of Development Studies of the University of Sussex, both in the UK.