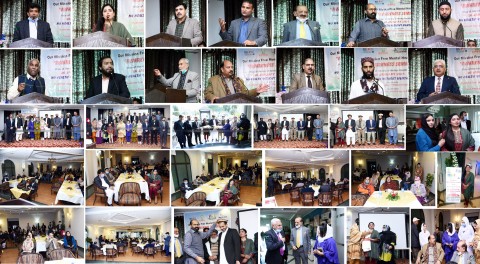 The main objective of this event was to highlight how mental health awareness is vastly underplayed by a majority of the population, and therein lays the fundamental problem in many low and middle-income countries. There are numerous causes that hinder the progress in mental health service delivery in such countries. These include social stigma, lack of enough trained professionals in mental health care, challenges in the delivery of mental health care in primary-care settings, to name a few. Stigma can lead to discrimination, both of which are negative aspects of ignorance and misinformation. Societal stigma often seeks to victimize individuals exhibiting traits of mental illnesses and ostracize them from the community. Self-stigma is the prejudice based on which people with mental illness turn against them. The general public tends to disapprove of persons with psychiatric disabilities. The need to combat societal stigma should be considered as an integral step towards the promotion and propagation of mental health awareness. Campaigns regarding this matter have been known to yield favorable results. However, in order for those campaigns to succeed, we need to educate the common masses about mental illness. The concept of mental health literacy encompasses recognition, causes, self-help, facilitation of professional intervention, and navigating the information highway. Therefore, it proves to be an important measure of awareness and knowledge of mental health disorders.

Enhancement of mental health awareness is a necessity for the large and, predominantly conservative Pakistani society where most people with mental health problems have been reduced to a voiceless minority. Information-rich, jargon-free content from reliable sources available via various media portals along with celebrity endorsements and/or documentaries can serve as authentic narratives. Modern technology and social media can prove to be important benefactors in this matter.

However, in Pakistan, efforts to engage the community in these campaigns have been only marginally effective. With the aim of strengthening such collaboration and strategically involve the society in mental health and substance abuse prevention, ISSUP Pakistan Chapter and Umeed Clinic organized the awareness seminar on the topic “Role of Society in Mental Health Issues” with collaboration KIMH Trust hospital Mir Pur Azad Kashmir and Youth Forum Pakistan (for Drug Use Prevention), on January 26, 2021 by Ms. Shabana Khaliq Chaudry, Clinical Psychologist and a renowned Social worker and SUD professional hosted the program. The seminar was attended by more than 100 people from the business community, health professionals, youth leaders, media persons, and from different walks of life.

Ms. Saima Asghar, Director ISSUP, Pakistan chapter highlighted the introduction including aims and objective of ISSUP & Pakistan chapter and its ongoing working of the ISSUP Pakistan Chapter in the Country. She further added that psychological problems in Pakistan are widespread. According to one estimate, around 50 million people in Pakistan suffer from mental disorders. A range of psychiatric disorders have been reported, such as depression, substance and alcohol misuse, schizophrenia, bipolar disorder, and post-traumatic stress disorder. According to her, 36 percent of Pakistanis suffer from anxiety and depression, which is often caused by strained family and friend relations, the feeling of not fitting in the society, the unstable economic and political conditions of the country giving rise to unemployment and poverty. She stresses the importance of awareness regarding mental health problems and said it is the need of time to aware of society and help those suffering from mental health problems.

Mr. Muhammad Aslam, President Youth Forum Pakistan and MA Jinnah foundation presented on the occasion and spoke about the working of Youth Forum Pakistan. He told that there are many myths regarding the mentally ill. People who have psychosis are shunned as violent. Secondly, it is believed that mental disorders are communicable, that is, the evil spirit of the patient can afflict the persons interacting with the patient. Thirdly, many people feel that shrines offer the best chance of recovery from affliction. It is frequently reported that patients are physically harmed as part of their treatment. He spoke about the importance of mental health awareness and said it is a need of the time to educate society about the diseases.

After the seminar, an award ceremony was held to pay the tribute to the mental health practitioners, front-line workers who are on the frontlines of battling the war against mental health problems.

Later on, leaders of the civil society from Pakistan and AJK, addressed the audience and appreciated the work of ISSUP, Pakistan Chapter, KIMH, and Youth Forum Pakistan. They said that such programs should be organized on regular basis. They offered their full support for the ISSUP Pakistan chapter to work for the betterment of society.