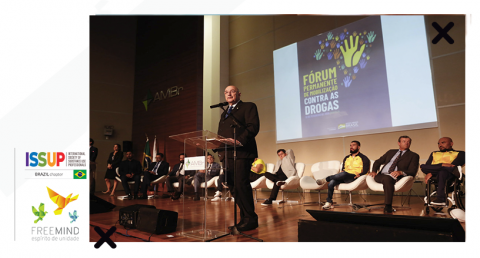 The Permanent Forum for Drug Mobilization was launched by the Ministry of Citizenship on Wednesday, February 12, 2020, in Brasilia and called for entities and society to participate in the work of prevention and combating drugs. In addition to the federal government's commitment to investing in effective public policies in defense and assistance to drug addicts and family members, the mobilization warned of the harms of the use of narcotics.

The proposal also wants to raise awareness among the population on central topics, reflecting the position of the Brazilian population mainly contrary to drug legalization initiatives, for example.

An open letter on the subject was presented to participants. The manifesto brings guidelines for the referral of some issues in practice – such as holding seminars, meetings, thematic events and actions against drugs in Brazil. Entities, representatives of civil society, researchers, university professors, artists and athletes who attended the launch of the Forum signed the document.

According to the Secretary of Drug Care and Prevention of the Ministry of Citizenship, Quirino Cordeiro Júnior, the idea is that the population also participates. "The goal is that it can be signed by the entire population and other entities that were not with us at launch. The idea is to have a firm manifesto, of course, so that we can build a drug-protected society," the secretary said.

The manifest is online and can be accessed here.

In order to collaborate in the construction of a country protected from drugs, leaders from different sectors of Brazilian society are organized in the "Permanent Forum for Mobilization Against Drugs", an organism above parties, ideologies or religions.

Drug use is among the main causes of traffic accidents, contributes to the increase in the number of suicides and, both by consumption and trafficking, takes the lives of thousands of young people, being also responsible for the degradation of the human being in the numerous cracolândias scattered throughout the country.

To avoid scenarios such as these, the Forum is favorable to effective public policies against drug trafficking and in the defense of assistance to drug addicts and their families.

Reflecting the position of the Brazilian population mainly contrary to drug legalization initiatives, the Forum advocates the prohibitions of planting, import and export, the size and use of illicit drugs, such as marijuana, cocaine, crack and heroin, among others.

Prevention of drug use, including tobacco and alcohol, as well as the care of chemical addicts, needs to reach the entire population, especially the most vulnerable, with assisted abstinence as a strategy for the recovery of users for a full, responsible and citizen life. Such measures, the Forum advocates, also serve as a stimulus to combat violence, often caused by the consumption and trafficking of drugs in our country, realing lives, disrupting and destroying families.

To achieve its objectives, the Forum proposes to mobilize society through seminars, meetings, thematic events and actions against drugs in Brazil. Thus contributing to the effective information of Brazilian society about the real harmcaused by drugs and helping in its mobilization for actions that change the reality in which we live.