National Report on the Drug Situation in Lebanon 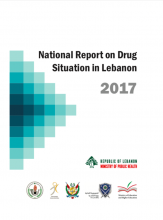 The document National Report on Drug Situation in Lebanon offers an insight into the coordinated approach taken by the Department of Public Health, academic stakeholders and other ministerial departments in reducing the prevalence and impact of substance use disorders in Lebanon.

The report was developed by the Ministry of Public Health with support from the EMCDDA, UNODC and the Pompidou Group Mediterranean.

The resource covers the legal framework in Lebanon, prevention, treatment, and also looks at the national drug strategy. It also details the establishment of the National Observatory for Drugs and Drug Addiction allowing better monitoring and reporting on drug trends.

The report outlines emerging drug trends and notes the most commonly seized drugs to be cannabis, cocaine, the amphetamine type drug Captagon and ecstasy. A slight increase in reported drug use  among school children aged 13-15 which sits at 4.7% and an overall increase in the number of people being arrested for drug offences are noted.

Within the report the pathways towards treatment through the criminal justice system is also highlighted with 4% of those arrested for drug offences during the reported period being referred onto treatment and half of that population successfully engaging with treatment until recovery.

Various sociological events are also described in the document which may be of interest to researchers including the demographic changes taking place in Lebanon in recent years with an increase in the number of displaced people now residing in the country. In addition the public health system and availability of treatment programmes is also mentioned.

Both English and Arabic versions are available at: http://moph.gov.lb