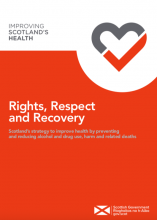 The Scottish Government has released the new Alcohol and Drugs Strategy, which aims to improve health by preventing and reducing alcohol and drug use, harm and related deaths. There were a record 934 drugs-related deaths in Scotland in 2017, a figure that has almost doubled since 2007. Drug- related hospital admissions have shown a similar upward trend.

Scotland's first drugs strategy for a decade focuses on treating the issue as a public health concern rather than a criminal justice issue. Joe FitzPatrick, Minister for Public Health, Sport and Wellbeing explains, “There is a growing awareness that those experiencing problematic alcohol and drug use are often carrying other burdens such as poverty, inequality and health challenges.”

There is a clear focus on prevention and early intervention outlined in the publication, which covers proposals for environmental, selective and universal prevention strategies. All actions are informed by the latest evidenced scientific research. The report also proposes an integrated person-centred approach to treatment and describes the aim of the Scottish Government to further develop a recovery-oriented system of care.

The strategy commits to reducing the current levels of harm and discrimination towards people and their families and, overall, puts people’s human rights at the very centre of policies and practice.