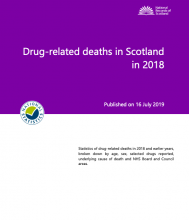 This report, published by the National Records of Scotland, provides statistics of drug-related deaths in 2018 and earlier years, broken down by age, sex, selected drugs reported, the underlying cause of death and NHS board and council areas.