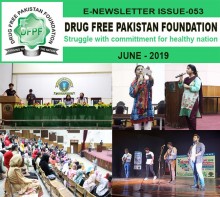 During this month, trained and empowered students by Drug Free Pakistan Foundation from University of Education, Township and Bank Road Campus Lahore organized 3 Social Action Projects. Out of these 3 SAP’s two were organized in Bank road campus and 1 was organized at Township campus. These SAP’s includes panel discussion on classical and contemporary music and musical performance from students of bank road campus. Along with these SAP’s DFPF team organized the concluding event of its Lahore project on 21st June, 2019 at Ali Auditorium, Lahore. In this month, World Day against Drug Abuse and Illicit Trafficking was observed on 26th June, 2019 on which US Consulate General Karachi highlighted the video story of Mr. Ahmad Shah (Youth Program Manager-DFPF) which includes his journey and struggle in field of Drug demand reduction and how he had changed lives of several other youth of Pakistan. During this month DFPF’s volunteer and partner from Khairpur and wazirabad respectively organized activities on World Drug Day in their respective cities.

On June 17, 2019 DFPF arranged an Expert Talk in UOE Bank Road Campus, wherein students were enlightened about how Music has evolved as the most powerful medium of peace promotion worldwide and how different genres of music over decades have contributed in the attainment of harmony and tranquility globally. The event started with Mr. Sibt-e-Hasan (Engagement Officer DFPF) introducing the historical narrative of music’s marriage with universal peace and brotherhood. This was followed by inviting the Expert for the day, Mr. Ali Hassan Sonu (Member Punjab University Music Society and practicing Vocalist) to share his views on the subject under discussion. Focusing the Pakistani Music Industry, he stated that in the modern era only those musicians could make their mark who attained grip on both Eastern as well as Western forms of music. He further elaborated that classical and contemporary music should go hand in hand in the changing times, as West had also recognized the same and was resorting to learn and teach classical eastern instruments like Tabla, Sitaar and Pakhawaj etc. He remarked that adopting music impacts one’s personality with subtlety of attitudes, mannerism and ethics. He also emphasized that those who were God gifted with musical tendencies must pursue music and do justice with the innate talent for prevalence of peace around them.

On June 17, 2019 at Bank Road Campus UOE, a SAP in the form of Musical Peace Performance was conducted in the Auditorium. The session started with welcome notes by the moderator Mr. Sibt-E-Hasan (Engagement Officer DFPF). He then invited the first student performer, Ms. Ayesha Mehak to the stage for her musical piece. The dhamal performance was echoed by the students and gave everyone goosebumps. Upon the end, the audience gave a standing ovation to the singer for bringing to life the sufi message of peace and universal brotherhood.

On June 18, 2019 DFPF arranged a Panel Discussion in UOE Township Campus, wherein experts from both classical and contemporary genres of music were invited to share their thoughts on how Music, in all its variations, has contributed in bringing people closer and spreading the message of love and peace. The event started with Mr. Sibt-e-Hasan (Engagement Officer DFPF) introducing the panelists that included Mr. Vicky Hussain (Student NCA and Singer ‘Teen Taal’ Band) and  Mr. Ali Hassan Sonu (Member Punjab University Music Society and practicing Vocalist).  He said that popular contemporary singers like Atif Aslam and Ali Zafar etc. had revived the old sufi songs in modern musical remixes so as to convey and transfer the heritage to younger generation. He also urged that the music societies of universities play a major role in realizing and propagating music, not just as a form of entertainment or art but as an alternate medium of peacebuilding. He also advised the students to fulfil their music dreams despite the hindrances, and make it a cause to bring harmony and peace in surroundings through their music.

DFPF, after working eight months with the students of UOE on conflict resolution and peace promotion, conducted its concluding event at Ali Institute of Education, Lahore on June 21, 2019. The event was intended to bring to forefront the shift in students mindsets and development in their skills after having attended all the workshops, mentorship sessions and SAPs etc. This was followed by a project presentation by the students of bank Road Campus wherein Zainab Abbas, Robiqa, Haleema Arshad and Kainaat Rauf explained their understanding and learning from the project and their progression as peace ambassadors through various phases of seminars, workshops, mentorship sessions and SAPs. A theatre performance by the students of Township Campus Drama Society ensued who presented a drama on inclusion, non-discrimination, acceptance, conflict resolution and peace promotion. The audience applauded the real-to-life performance of actors and appreciated the message conveyed. A throw-back video of the whole project was then displayed that covered all the memories and experiences that the students engaged in during the project. One of the eminent students from this project named Bilal was then invited on stage to share his success story which he outlined before the audience. He said that prior this project he was a shy student who had little exposure and knowledge of his own abilities. However, during script writing mentorship sessions with Mr. Faseeh Bari Khan, he realized his potential of writing and started expressing himself in both poetry and prose.

It was a gratified moment for Drug Free Pakistan Foundation that United States Consulate General Karachi posted a video on journey of Mr. Ahmad Shah (Youth Program Manager-DFPF) with title “Hamaray Heroes”. This video was published on occasion of World Drug Day 26th June, 2016 on their social media platforms. The video covers the journey of Ahmad Shah from his early career till now in the field of drug demand reduction. Mr. Ahmad Shah shared his journey and how he excelled in this field, he also shared his vision in working for the society to eradicate drugs from society by empowering youngsters to come forward and join hands together in educating others. He also shared his community work in his home town and other cities and countries around the globe along with his participation in several international platforms. Until now the video has been viewed by more than 110,000 people from around the globe.

Mr. Habib ur Rehman (DFPF Volunteer and PYC Ambassador) from Khairpur organized several activities in his cities to observe and aware people about World Drug Day on 26th June, 2019. To mark the importance of this issues and aware youth and community people about hazards of using drugs and its impact on individual and society, he organized several activities including sports competition, awareness walks and seminars at different educational institutes of Khairpur. His meticulous and diligent efforts to educate the youth of Khairpur about this important issues which is on rise especially in youth of Pakistan is remarkable and admirable.

Mr. Muhammad Jameel Cheema (President Anti-Narcotics Welfare Society/PYC Ambassador) organized Drug Awareness walk and rally on 26th June 2019 in Wazirabad, Punjab to observe World Drug Day. Mr. Jameel Cheema also runs a drug treatment and rehabilitation centre with the support of community people. During his rally on vehicles he urged people to avoid using drugs and help others in getting rid of this disease. He also shared several examples of people who had successfully treated at their treatment and rehabilitation centre and are now living a healthy life. Several prominent political, administrative, law enforcement and business personnel’s were part of his rally and showed their support towards the betterment of society and educating others on this issue.