‘Doing More With Less’: An Appropriate Response to Alcohol-Related Death? 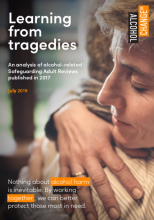 Deaths in England directly caused by alcohol rose by 11% between 2006 and 2017. During the same period, hospital admissions in which alcohol misuse was a primary factor increased by 17%.

Cuts to alcohol services in the name of austerity have only made the problem worse, with many vulnerable people not receiving the help that they need.

In this context, a recent report by Alcohol Change UK, entitled Learning from Tragedies: An Analysis of alcohol-related Safeguarding Adult Reviews (2017), set out to understand more about alcohol’s role in the lives of vulnerable adults.

The organisation analysed 11 Safeguarding Adult Reviews (SARs) published in England in which alcohol was identified as having a significant role in a person’s life and/or death.

Given these findings, the report suggests that there is a need for:

The report also considers the cases in the context of current legislation and discusses how practitioners could most appropriately apply such laws to similar situations. It also looks at the ways in which existing guidance could better address issues of alcohol-related self-neglect.