Harm to Others from Drinking: Patterns in Nine Societies

Published by
WHO
Publication Date
25 October 2019 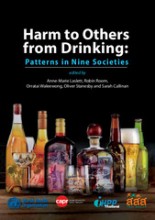 The adverse impact of alcohol consumption include the negative consequences of drinking on individuals other than the drinkers themselves, including both health and social problems.  Alcohol’s harm to others (HTO) is an interactional occurrence at the level of individuals and their relationships and is determined from the perspective of those affected by the drinker rather than from the perspective of the drinker or the society. The major social relationships to drinkers involve four main sets of roles: family, friend, co-worker and stranger.

In 2011, WHO, the Thailand Health Promotion Foundation (ThaiHealth) and the Centre for Alcohol Policy Research (CAPR) agreed to collaborate in conducting and supporting an International research project on harm to others in LMICs, under the Memorandum of Understanding between WHO and ThaiHealth on Health Promotion (MOU).

This book draws together the results of national surveys in Thailand, Chile, India, Lao People’s Democratic Republic, Nigeria, Sri Lanka, Vietnam from the project, as well as Australia and New Zealand. It describes and compares harms from others’ drinking cross-nationally and focuses on different aspects of alcohol’s harm to others in each country, for instance, the effects of coworkers’ drinking in Lao People’s Democratic Republic and harms to children from adults’ drinking in Vietnam.