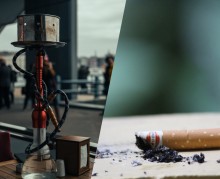 Tobacco use amongst the youth is a growing prevalent issue, with traditional tobacco products, such as the narguileh, being the main culprit. One survey indicated that the rise in tobacco use, through narguileh smoking amongst teenagers is increasing, due to its widespread acceptance within families and in society. This phenomenon is more prevalent in Lebanon, than other countries in the Middle East.