Substance Use, Mental Health and Suicide among Inuit in Canada 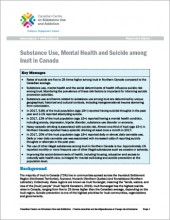 The new report sheds more light on the risk and protective factors for suicide among Inuit across Northern Canada. As Inuit have some of the highest suicide rates in Canada, with rates in some Inuit regions being 25 times higher than the Canadian average. The risk of suicide is elevated among Inuit because of intergenerational trauma from colonization, marginalization and the loss of the traditional Inuit lifestyle of harvesting and gathering food from the land.

The summary report reviews the risk factors for suicide among Inuit. These include mental and community distress, such as mental health conditions, substance use and socioeconomic inequities. Aligning with CCSA’s priority to address harms related to substance use, statistics on alcohol, cannabis and other substance use are also captured in the summary.

It is expected that this report will be a resource for Inuit organizations, for people working in suicide prevention, and researchers and policy makers who work with suicide risk and the broader mental well-being of Inuit in Canada.