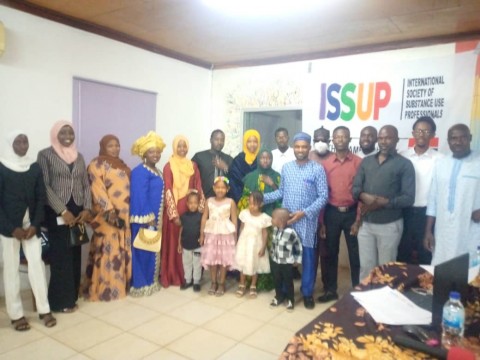 The Gambia has finally joined the prestigious list of countries forming the International Society of Substance Use Professionals (ISSUP). The small West African country recently formalized its membership in the global drug demand reduction body with a colorful in-person and online event that was followed by a webinar on “Community Resilience in Substance Use Management” which attracted participants from 66 countries around the world.

In her welcome remarks, Livia Edegger, the Deputy Director of ISSUP Global welcomed the audience to the launch and thanked all those who were involved in the initiative aimed at bringing together the drug demand reduction workforce in the Gambia. Edegger informed the audience that ISSUP is an international organization of 23,000 members from around the world working in the areas of prevention, treatment, and recovery support. She disclosed that ISSUP was established by a group of international organizations and experts in the drug demand reduction field brought together by the US Department of States Bureau of International Narcotics and Law Enforcement Affairs (INL).  Edegger expressed gratitude to INL and especially William McGlynn, the Senior Adviser, Office of Global Policy and Programs for Drug Demand Reduction for supporting the development of ISSUP national chapters around the world.

Deputy Director Edegger further informed the audience that ISSUP Global provides drug demand reduction professionals with access to training and credentialing, and opportunities to build networks, share knowledge and learn from each other. She called on those in the audience who were not yet members to join ISSUP and implored the local attendees to join the ISSUP Gambia National Chapter to help advance the cause of drug demand reduction in the country.

In his remarks, Mamudou Jallow, the General Secretary of ISSUP Gambia National Chapter said the national chapter was being launched to cultivate a dynamic team of substance use professionals equipped with the right knowledge and skills to undertake evidence-based substance use prevention, treatment, and recovery support initiatives in the country in line with ISSUP’s vision and mission. Jallow said launching an ISSUP national chapter allows them a structured and effective approach to attaining drug demand reduction by streamlining their efforts with ISSUP’s remarkable evidence-based strategies.

The General Secretary also informed the audience that since the registration of the ISSUP Gambia National Chapter in the summer of 2021, they successfully organized a conclave in October 2021 that brought together all the organs of the National Chapter for the first time. This, he went on, was followed by a workshop for about 50 teenage students at the Glory Baptist International School in March 2022 as part of ISSUP Gambia’s program to sensitize school children on crucial preventive strategies to help them stay away from drugs.

In her opening address, Coumba Mathurin Diop of the UNODC Gambia Office said her office seeks to promote evidence-based treatment and human rights policies, strategies, and interventions as a way of reducing the negative health and social consequences caused by drug use disorders with an emphasis on low and middle-income countries. Diop revealed that her office has a comprehensive integrated health-based drug policy that aims to reduce the non-medical use of drugs, relieve suffering and reduce drug-related harm to individuals, families, communities, and societies in general.

Diop further called on the need for voluntary treatment in tackling drug dependence through treatment, care, and delivery.  She observed that ISSUP provides a unique and multi-disciplinary platform that promotes the professionalization and exchange among substance use prevention, treatment, and recovery professionals.   This, she noted, encourages the development of a trained, knowledgeable, and effective international network of experts supporting high-quality strategies for the attainment of drug demand reduction around the globe. In conclusion, Diop stressed the need to train personnel involved in the treatment, aftercare, rehabilitation, and social reintegration of drug users.

Delivering the keynote address, William McGlynn of the International Narcotics and Law Enforcement Affairs (INL) said that his office focuses heavily on evidence-based training due to the need to bring together the most recent and effective practices and research to deal with the growing problem of drug use. McGlynn pointed out that the collaboration between INL and ISSUP has been crucial in impacting a problem that a lot of countries around the world are grappling with.

Delivering the closing remarks, Alasana Drammeh, the Executive Director of the ISSUP Gambia National Chapter said that his organization engages in sensitization and outreach activities geared toward the attainment of drug demand reduction in the communities that they operate. Director Drammeh also pointed out that as a national chapter, his organization will focus on enhancing the capacities of its members and organizing school-based workshops to sensitize school-going kids on the dangers associated with drug abuse.

To achieve its stated goals, the Director announced the national chapter’s intention to build community coalitions to prevent drugs from getting into the hands of the youths and children through drug prevention, treatment, and recovery initiatives and by engaging policymakers in a partnership that will lead to drug demand reduction in the country. While noting that membership in the ISSUP Gambia National Chapter is open and voluntary, Drammeh thanked all those who were involved in the establishment of the national initiative.

Other speakers at the launch were Michael Brobbey of ISSUP Global and Ousman Saidybah, a senior official of the Drug Law Enforcement Agency of the Gambia (DLEAG).

Highlights of the webinar on “Community Resilience in Substance Use Management” will be published in a subsequent article.