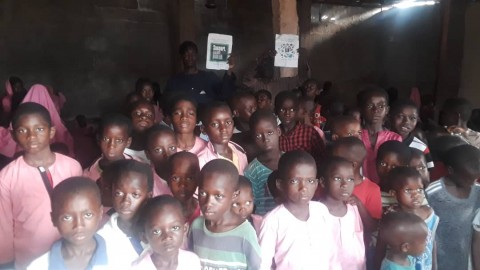 With assistance from the Support. Don’t Punish Campaign, the ISSUP Gambia National Chapter organized a school intervention program as part of its commemorations marking the International Day Against Drug Abuse and Illicit Trafficking also referred to as World Drug Day on June 26th, 2022.

Speaking at Nurul Huda Islamic School of Dippa Kunda, Ousman Drammeh, a member of the ISSUP Gambia National Chapter said it is time to rethink new strategies in sensitizing the Gambian society on the dangers of the drug menace. While arguing that several strategies used in the past had failed to yield the expected results and dent the number of drug-related arrests in the country, Drammeh suggested that it is time to approach prevention strategies using proactive means.

Drammeh suggested strategies such as naming and shaming drug peddlers, community service for drug offenders, and the formation of watch groups to protect schools and other at-risk areas from being flooded with drugs. These, he said, were some of the possible mechanisms needed to tackle the drug menace besetting Gambian society.

While urging students to be vigilant of people hell-bent on destroying their future by introducing them to drugs, Drammeh told the youth that they will only contribute to the socio-economic development of the country as sober citizens who are not impaired by drug use.

Speaking on the role of religious-based schools in drug prevention, Mr. Assan Camara called for the establishment of prevention programs in all religious schools across the country and the need to enhance the capacities of religious teachers to be able to run prevention programs in their schools. Camara also stressed the need to increase the awareness of the wider society on the negative implications of drug use and the impact it has on families and communities.

Another speaker at the school intervention program was Mr. Lamin Singateh, a member of the ISSUP Gambia National Chapter.  Mr. Singateh tasked the students to serve as ambassadors promoting a safe and drug-free Gambia where everyone will be happy to live.