Mental Health of Youth and Substance Use: Mood Disorders in Children and Adolescents 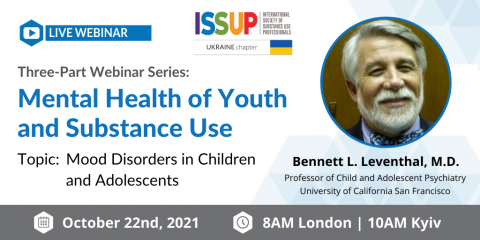 ISSUP Ukraine is pleased to invite you to attend the Second Webinar in their Three-Part Series on 'Mental Health of Youth and Substance'. This Webinar will focus on Mood Disorders in Children and Adolescents.

Substance-abusing youth are at higher risk of incurring mental health problems, including depression, personality disorders, suicidal behaviours compared to non-users. Substance abuse may increase symptoms of mental illness or trigger the new one. Similarly, young with depression are at higher risk of using substances. As many young people with mild depression go undiagnosed, the condition can appear to be the result of addiction. Substance use disorders among depressed youths are a risk factor for suicidal behaviors.