International Standards for the Treatment of Drug Use Disorders 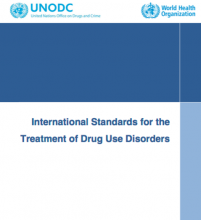 Drug use disorders are a serious global health problem. The United Nations Office on Drugs and Crime (UNODC) estimates that 246 million people, or one in twenty 15- to 64-year-olds, used an illegal drug in 2013. Of those who use, one in ten is suffering from a drug use disorder. Scientific evidence suggests that such dependent behaviour is best treated within a public health framework. Despite this, the view that drug addiction is a character pathology or a moral failure persists in many countries all over the world.

As a response, UNODC has recently produced a set of evidence-based international standards for the effective treatment of drug use disorders, where recovery and not punishment remains the ultimate goal. The report advises that “only treatment that has at its core [an] understanding of drug dependence as primarily a behavioural disorder, that can be treated using medical and psychological approaches, can improve the chances of a recovery […] Using only law enforcement strategies and methods is unlikely to result in sustained positive effects.” At this early stage, the document remains in draft form. It will now be piloted in a select number of countries to see how the standards can be applied and how they make a difference.