Reducing Opioid-Related Deaths in the UK 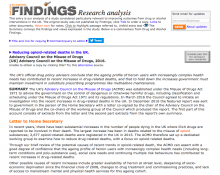 Robust messages for the government from the UK’s official drug policy advisers:

The UK’s Advisory Council on the Misuse of Drugs (ACMD) was established under the Misuse of Drugs Act 1971 to advise the government on the control of dangerous or otherwise harmful drugs, including classification and scheduling under the Misuse of Drugs Act 1971 and its regulations. In March 2016 the Council agreed to initiate an investigation into the recent increases in drug-related deaths in the UK. In December 2016 the featured report was sent to government in the person of the Home Secretary with a letter co-signed by the chair of the Advisory Council on the Misuse of Drugs and the co-chairs of the working group of the Council which produced the report. The first part of this account consists of extracts from the letter and the second part extracts from the report’s own summary.