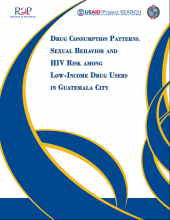 In sum, this drug user population in Guatemala City is at heightened risk of HIV, although some of the
risk results from overlap with vulnerability experienced as members of groups at heightened risk, such
as gay/bisexual men, transgender women, and sex workers. Future HIV programming should expand to
include HIV prevention in drug programs and drug prevention/treatment in HIV prevention activities.