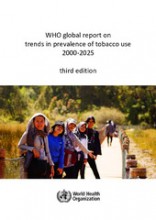 Tobacco is the only legal drug that kills many of its users when used exactly as intended by manufacturers. WHO has estimated that tobacco use (smoking and smokeless) is currently responsible for the death of about six million people across the world each year with many of these deaths occurring prematurely. This total includes about 600,000 people are also estimated to die from the effects of second-hand smoke.

Progress in reducing tobacco use is a key indicator for measuring countries’ efforts to implement the WHO Framework Convention on Tobacco Control.

These reports present WHO estimates of tobacco use prevalence, numbers or users, and changes between 2000 and 2018, projected to 2025. Estimates are at global, regional and country level.