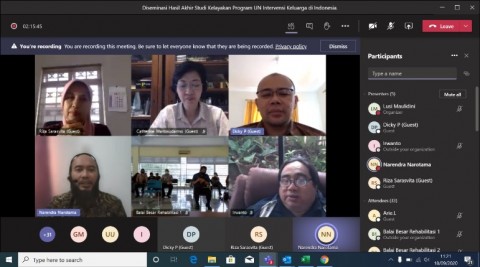 In response, the United Nations Office on Drugs and Crime (UNODC) has developed and field tested the Treatnet Family training materials on elements of family therapy for adolescents with drug use disorders including those in contact with the criminal justice system. The overall objective of this study is to determine the feasibility of delivering Treatnet Family (TF) in community settings in Indonesia. Another objective was to examine the impact of TF among adolescents with substance use disorders (SUDs)/problematic substance use in reducing their substance consumption and substance-related activities, as well as in improving their psychological wellbeing and communication within the family.

Initial study results demonstrate that the intervention can be effectively used by practitioners in community settings. Moreover, participating adolescents showed a significant reduction in substance use and substance-use related problems, from pre-TF to follow-up. The number of adolescents who smoked cigarettes, consumed marijuana and amphetamine showed a slight reduction across time. Participating in TF sessions also led to significant changes in adolescent’s involvement with friends who conducted specific antisocial behavior such as skipping school without permission, drinking alcohol regularly, and showing signs of violence. The parents observed positive changes in the adolescents such as willingness to spend more time with them, being more obedient, improved communication, helpful with chores, increased motivation to study, showed changes in their sleeping patterns, and changes in late-night hang out habits.

Due to the COVID-19 pandemic, the dissemination to national counterparts of the positive and encouraging findings of the UN TF Indonesia feasibility study, was conducted virtually.

This online event was held on September 18th, 2020 and it was attended by thirty-six (36) officials from nine (9) agencies and ministries with three (3) speakers, and three (3) officials from UNODC.  The UNODC Country Manager for the Programme Office Indonesia inaugurated the event with opening remarks and welcomed all attendees, including representatives from the National Narcotics Board (BNN), the Ministry of Social Affairs (MoSA), the Ministry of Health (MoH), the Indonesian Association of Addiction Counselors (IKAI), and government-based treatment centres.

Additional three presentations were held by the BNN and two National Research Partners (NRPs). The BNN representative highlighted from a policy perspective the role of family in supporting its member with drug related problems, followed by the presentations of NRPs that outlined study findings from East and North of Jakarta.

After a Q&A session, this event was concluded with statements from BNN, MoSA and MoH, in which they agreed to have further discussions to initiate and strengthen a process of collaboration on the UNODC TF programme and national level family-based initiatives and to support each other in the implementation of the national drug demand reduction strategy.