Please scroll down to read the full text and watch the video at the bottom.

Neurons are the functional units of the nervous system, considered as “the cells of the mind.”They specialize in detecting changes in the environment and in responding to them; they also coordinate the functions of the organism itself. In broad terms, they consist of a cell body or soma and extensions (projections) of two types: dendrites and axons. To understand the importance of these structures, note that the body nerves are large groups of many axons. Neurons communicate through their extensions. The areas where this communication takes place are the synapses. 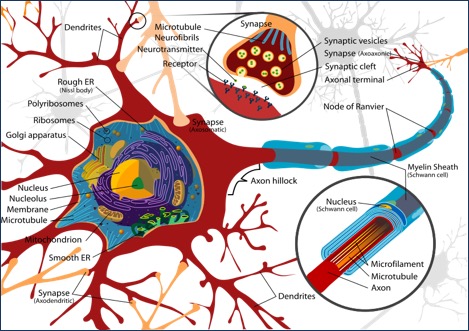 A single neuron can be connected to many others by multiple synapses. As an example, we shall describe a simplified model of communication between two neurons. The most common synapses are chemical, although there are also electrical synapses. Both types have three common elements: the presynaptic neuron, the synaptic cleft or space, and the postsynaptic neuron. These names are used to refer to the flow of information traveling between cells. In this example, the presynaptic neuron transmits the message to the post-synaptic neuron.

In chemical synapses, at the end of the presynaptic axon, there are vesicles or reservoirs with the molecules that will take the signals to the receptors on the postsynaptic neuron membrane.

Like all cells, neurons have a cellular membrane that seals them off from the environment. Thanks to this separation, inside the neuron there is a higher concentration of potassium ions and proteins, while on the outside there are high concentrations of sodium and chlorine. 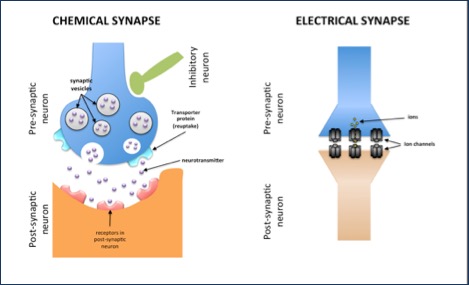 Neurons understand and use an electrical language based on the charges from the ions and molecules that are inside and outside the cellular membrane. When a neuron is “quiet or silent,” its internal environment has more negative electric charges than the outside. These conditions change abruptly when the neuron interacts with others. A single neuron can communicate with many others at the same time and can "understand" the final message because it integrates the multiple electrical signals it receives. Based on the changes of permeability to specific ions of its cellular membrane, neurons decode differences in the distribution of internal electrical charges. A positively charged environment produces a wave of electrical information called action potential, which propagates rapidly and in all directions within the cell and also through the axon. If this action potential reaches an electrical synapse, the current passes directly to the postsynaptic neuron; but if it is a chemical synapsis, the change in the electrical charge opens some pores in the membrane of the neuron through which the calcium ion enters. This higher concentration of calcium inside the presynaptic neuron sets off the start of the neurotransmission. 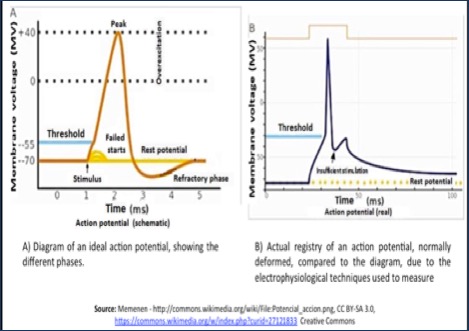 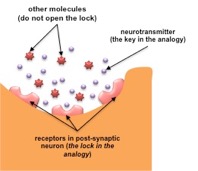 Neurons have specialized protein structures that because of their specific interaction with other chemical substances serve the process of cellular communication. The substances that bind with receptors are known as “ligands.” For neuronal communication, we shall discuss two large groups of receptors:

Ionotropic– when activated by their ligand, the tridimensional structure and configuration of their proteins change, allowing the ions, whether negatively charged (chloride) or positively charged (calcium, potassium and sodium), to pass through. They are also known as ionic channels.

Metabotropic– are formed by long chains of amino acids that pass seven times through the cellular membrane. The interaction with their ligand activates or inhibits specific proteins (G proteins) linked to the cellular membrane, which are involved in the production of other molecules such as AMPc.

Neurotransmitters are the interlocutors in conversations between neurons. In general terms, they are substances that have a simple chemical structure, grouped under three broad categories: amino acids, amines, and peptides. These substances intervene in the communication between neurons that control very different functions.

Dopamine– this catecholaminergic neurotransmitter participates in regulating movement, emotion, affect, and neuroendocrine communication. It is synthesized from the L-tyrosine amino acid. At least there are five different types of dopaminergic receptors; all coupled to G proteins and part of two pharmacological families: 1) D1-like family (subtypes D1 and D5) – stimulate the formation of AMPc, and 2) D2-like family (subtypes D2, D3, and D4) – inhibit the formation of AMPc, activate K+ channels and reduce the entry of Ca++ ions through voltage-dependent channels. There are different subtypes of dopaminergic receptors distributed throughout the Central Nervous System (CNS). In the Peripheral Nervous System, dopamine modulates the cardiac and renal functions, vascular tone and gastrointestinal motility. Dopamine and dopaminergic neuronal networks get much attention because of their critical role in illnesses and disorders such as Parkinson’s disease, schizophrenia, and drug use disorders. In the latter case, besides dopamine, there are other neurotransmitters involved.

GABA– the Gamma-Aminobutyric Acid is the primary inhibitory neurotransmitter in the CNS. Approximately 30-40% of neurons in the brain use it to communicate by means of the GABAA receptors (ionotropic) and GABAB (metabotropic). Five subunits form the GABAA receptors, which have at least eleven different structural sites for substances like barbiturates, benzodiazepines, ethanol, and others, whether agonists or competitive antagonists. Due to its structure, the conformation of the GABA molecule is flexible, which means that its various configurations may activate distinct GABA receptors.

Noradrenaline or norepinephrine– this catecholamine is a derivate product of the tyrosine amino acid. It takes part in alertness, level of consciousness, motivation, sensory perception, regulation of the sleep-wakefulness cycle, appetite, sexual behavior and neuromodulation of learning, memory and reward mechanisms; in most of these functions, it operates jointly with other neurotransmitters. There are two known classes of noradrenergic receptors: alpha and beta. The alpha1 are excitatory and exist in the brain, vascular smooth muscle, intestine, and cardiac muscle. The alpha2 have inhibitory effects and exist in the brain, vascular smooth muscle, gut, nerve endings, and platelets. There are three known types of beta receptors. The beta1 are excitatory and are present in the heart; beta2 receptors are present in smooth and striated muscle, the liver and lymphocytes, and also are excitatory. The beta3 are present in adipose tissue.

Serotonin– 5-hydroxytryptamine or 5-HT is an indolamine derived from the amino acid tryptophan. It is synthesized mainly in the raphe nuclei of the brainstem which projects throughout the central nervous system, with greater density in the basal ganglia and the limbic structures. Serotonin regulates a wide variety of effects mediated by binding to specific membrane receptors, which are present in both the Central and Peripheral Nervous Systems, and also in many other tissues of the intestine, cardiovascular system, and blood cells.   There are up to seven members of the family of serotonin receptors (5-HT1 to 5-HT7) and several subtypes. The 5-HT receptor groups are coupled to G proteins, except for 5-HT3, which uses ion channels. The broad distribution of the many subtypes of 5-HT receptors in the CNS explains the wide variety of their actions. Serotonin takes part in regulating mood, excitation, impulsivity, aggression, appetite, and anxiety.

Although different drugs have distinctive chemical properties, an element common to all is their capacity to produce positive reinforcing effects, which means that they cause an increase in the frequency of occurrence of the studied behavior (such as drug use), which tends to repeat. The first studies in this field come from the work of James Olds and Peter Milner. In 1954, these researchers conducted a study in rats, in which they observed that intracranial electrical stimulation of the hypothalamus and some associated regions might act as a reinforcer or reward for behaviors. Following their initial fortuitous observations, they used the paradigm of electrical self-stimulation in animal models to map the regions of the brain involved and discovered what they called the pleasure center. We know today that reinforcement comes from direct or indirect activation of the mesocorticolimbic dopamine system, which is formed by dopaminergic mesencephalic projections originating in the ventral tegmental area (VTA) and that project into the nucleus accumbens, the drugs’ principal target. The VTA neurons connect their axons to the nucleus accumbens, the striatum and the frontal cortex (structures that play a crucial role in motivation). The nucleus accumbens, a structural part of the limbic system, receives dopaminergic connections from the VTA, and glutamatergic connections from the lateral prefrontal cortex, the amygdala, and the hippocampus. The fact that the impulses coming from the cerebral cortex and the limbic system enter the nucleus accumbens shows the importance of this structure for the processes of motivation and reward produced by the repeated use of drugs.

Once we understand the formation of the neural pathways related to pleasure and reward, it is easier to comprehend how the artificial overstimulation that drugs produce in the nucleus accumbens causes the pleasurable effects that people who use drugs are seeking and makes them repeat this behavior. Drugs produce this due to different pharmacological properties and action mechanisms, discussed in the section about the effects of drugs. The brain is wired to ensure repetition of the activities that sustain life, by linking them with pleasurable, rewarding, or gratifying actions. Neural networks memorize which stimuli activate the reward system, fostering future repetition without actively thinking.

Some psychoactive substances can release two to ten times more dopamine in the reward circuit than the amount released by natural elements like eating and sexual intercourse. This consequence occurs almost immediately when smoking or injecting drugs, and their effects can last much longer than those produced by natural reinforcers. Such a big reward deeply motivates people to use drugs again and again.

There are three neuronal circuits mainly involved in the development of drug use disorders:

Drug use disorders are similar to other diseases, for example, cardiac conditions, that is, in both the regular and healthy functioning of underlying organs is interrupted, they have serious consequences, they are preventable, treatable and can last a lifetime without treatment.

People who use drugs experience alterations in brain functions such as a drastic decrease in the ability to perceive pleasure. Neuroimaging techniques allow demonstrating the evident differences of neuronal activity in the brains of drug users, in comparison with individuals who do not consume. As an example, methamphetamine users either undergo a significant reduction in dopamine transporters or a lower number of receptors that can receive signals. These neuroadaptive processes, named tolerance, lead to keep using drugs, again and again, trying to restore the normal dopamine functions, utilizing larger quantities of the substances to attain their psychoactive effects. 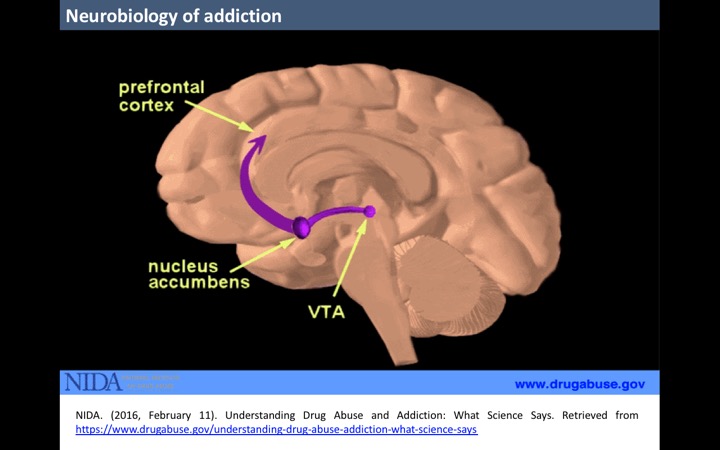