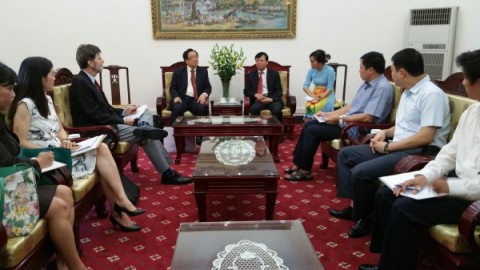 On 26 July 2016, Mr. Nguyen Trong Dam, Deputy Minister of the Ministry of Labor-Invalids and Social Affairs (MOLISA) met with Mr. Tay Bian How, Director of the Colombo Plan International Centre for Credentialing and Education of Addiction Professional (ICCE) to discuss possible collaboration in professionalising the Vietnamese addiction workforce.

The meeting was acknowledged as very strategic and timely as it aligns with the country’s Master Plan on drug treatment services where the shift from centre-based to community-based treatment is being made. Mr. Tay briefed Mr. Nguyen on the mission of Colombo Plan and ICCE programmes aiming to professionalise the field of substance use disorders (SUD) treatment.

Mr. Nguyen expressed its openness to collaboration with Colombo Plan through ICCE initiative to ensure the country’s adherence to international standards in SUD treatment and capacity building of addiction treatment workforce. In response, ICCE Director assured MOLISA of the Colombo Plan’s support and technical assistance in training of addiction practitioners as well as development of the national system of credentialing. The meeting resulted in the Government’s proposal to draft an MOU to formalise the collaboration.

Further on, in a pursuit to strengthen the initiative in Vietnam and ensure stakeholders’ engagement, ICCE attended the Stakeholders Meeting  organised by MOLISA and the Office of the Government in Hanoi, Vietnam on 26 July 2016.  Representatives from the national agencies, such as MOLISA, Office of the Government, Ministry of Health, University of Labour and Social Affairs (ULSA), and Supporting Community Development Initiatives (SCDI) as well as international organisations namely, the United Nations Office on Drugs and Crime (UNODC)-Vietnam and Substance Abuse and Mental Health Services (SAMHSA)-Vietnam were in attendance.

Mr. Nguyen Xuan Lap, Director, Department of Social Vices Prevention, (MOLISA) presented the workforce development plan for drug treatment and rehabilitation in the country, emphasising the transition from centre-based to community-based treatment. On the other hand, representatives from national agencies and international organisations provided an overview of their current programmes in Vietnam.

The participants noted that collaboration with and between government agencies and international organisations providing training in the field of SUD treatment is an important element for the successful implementation of all the current treatment initiatives in Vietnam. Defining the roles and areas of work of all the stakeholders will help maximise resources and expand the level of services in the country. Significantly, the meeting provided the means to strengthen this collaborative relationship among the organisations working for the development and professionalisation of SUD treatment services in Vietnam.