Lack of transparency in the disclosure of conflicts of interest in the area of alcohol, text warns 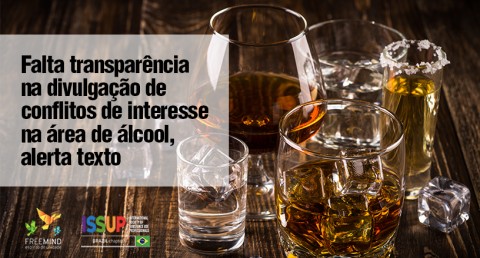 Concerned, from the scientific point of view and the formulation of public policies, with the lack of transparency in the dissemination of conflicts of interest by organizations that disseminate information in the media about alcohol use in Brazil, researchers from the City University of New York, UNIFESP and the Faculty of Medical Sciences of Santa Casa published text in the September issue of the Journal of Studies on Alcohol and Drugs. They warn that omissions and failures to disclose conflicts of interest put public health at risk.

The article focuses attention on the Health and Alcohol Information Center (CISA), an organization funded by the alcohol industry located in São Paulo, SP, which, since 2005, has been sponsored by AMBEV, part of the AB InBev group, the largest alcohol industry in the world, as well as transnational heineken, its main competitor.

Although, in addition to the alcohol industry, there is no other source of funding disclosed on the organization's website or in documents made available to the public, The CISA, according to the researchers, describes itself as an independent Non-Governmental Organization (NGO) with partnerships with universities and medical organizations. According to its press office, which also serves AMBEV, the organization presents itself as the main source of information on alcohol-related topics for the Brazilian media.

The text exemplifies with the pandemic caused by COVID-19. The Brazilian media, probably as a result of significant resources spent on press releases by the organization, regularly consulted CISA members about the likely impact that social isolation could have on alcohol consumption.

In these interviews, however, the text points out, the source of CISA funding is never disclosed, much less the aggressive efforts of the sector to increase alcohol sales in the period through massive investments in e-commerce platforms and sponsorship of live shows on various media platforms with Brazilian celebrities from the musical sphere.

The article, entitled "Who Is Really the Source of Alcohol Policy Information: The Example of a Social Aspects and Public Relations Organization in Brazil" concludes that the fact that an organization does not disclose its conflicts of interest in conjunction with the information it disseminates in the media harms society as a whole.

The authors also conclude that "progress has been made in the field of tobacco, but the alcohol industry still has these omissions and disclosure failures, putting public health at risk."