In Quito, Ecuador, we see how to address the comprehensive prevention of addiction 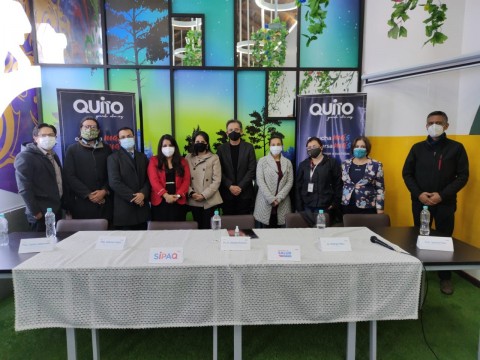 On December 2, 2020, the United Nations Office on Drugs and Crime, Ecuador, participated in the 'First Meeting of Experts in Prevention of Integral Addiction' organized by the Metropolitan Health Secretariat, through the Comprehensive Project for The Prevention of Addiction in Quito - SIPAQ.

The aim of the meeting was to generate spaces for dialogue and discussion about the socioeconomic phenomenon of drugs and other addictive behaviors.

The event, of a public nature, was developed in mixed format (presence, respecting capacity and virtual) with the support of specialists from various institutions, in addition to UNODC, such as the Ministry of Public Health, Parametry and The Group of Drug Research and Intervention of Ecuador (GIIDE).

Giovanna Ubidia, coordinator of the SIPAQ Analysis, Monitoring and Evaluation Unit, was responsible for initiating the dialogue. The dynamics of the event developed around three basic questions: What is the prevention of addiction?; Why should the country invest in addiction prevention? What are the challenges in implementing addiction prevention programs for the country and the Metropolitan District of Quito?

Gabriela Vallejo, Coordinator of UNODC, began her participation by noting that effective prevention in the use of substances points to the healthy and safe development of children and young people and promotes their positive participation. "Scientific evidence is fundamental to prevention. To do this, we must support research, collect good practices, and follow international standards."

Faced with the challenges of implementing programs and the role of local governments, she spoke of the comprehensive concept of approach. "Prevention is not about substances; prevention is linked to the social skills of the individual," he said, noting that prevention is timely in several areas. "For every $1 invested in prevention, at least $10 is saved in social costs," he added, emphasizing the importance of thinking about a cross-cutting approach to HRD in addressing consumer prevention.

In this context, Carlos Valenzuela, General Coordinator of GIIDE, spoke of a multi-naked intervention. "Community integration is important, we are investing in people, users and non-drug users. An ordinance prohibiting consumption in public space does not solve the issue; we need a policy that criminalizes less"

In turn, Rodrigo Vélez, from Parametría Consultores, concentrated his analysis on the lack of social interaction. "We abandoned the dialogue. We have to put prevention on the table as a collective construction right. It's not about filling the streets with police officers, it's about analyzing coexistence."

Finally, Ignacia Páez, manager of the Mental Health Project of the Ministry of Public Health, called for the removal of moral stigmas to prevent and make an intervention based on respect and differences. "If we think that prevention is to ban we are already on the wrong path. We question our place of authority and seek space for articulation. We talk about strengthening the family and giving children spaces of restraint without them feeling protected, pressured. Disciplines such as art, music, dance are spaces of prevention."

Maribel Romero, general coordinator of the Quito Integral Addiction Prevention Project, stressed that the meeting will allow establishing spaces for dialogue, analyzing the previous scenario and strengthening actions to promote health and, especially, prevent the use and use of drugs and other addictions. It also places the city of Quito as the country's preventive center, "being the first local government to have an addiction prevention system," he said.