'Just a happy hour': the silent danger of alcohol 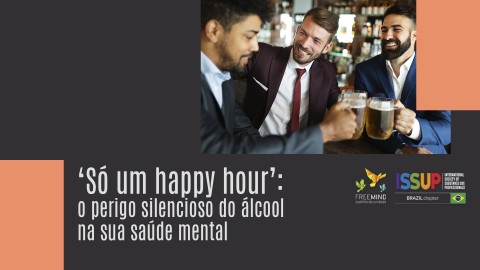 The long-aforemost Friday and happy hour came with friends from work. Go down one, two, three, ten and then you're drunk. More days begin to repeat themselves in the same way, in order to 'forget the problems' or 'feel free from the obligations of the world'.

Behold, the first signs of possible problems with alcohol and its influence on mental health begin.

When we say that, we are not condemning a happy hour with friends – which is extremely healthy for your social life – but the exaggeration and motivation that drives you to numb yourself.

Alcohol is socially accepted, but it is still a drug that can bring risks to those who consume it indiscriminately. That is why it is important to be aware of your habits in relation to your consumption.

This is because alcohol 'anesthetizes thoughts' and often the person uses it as an escape from their reality so as not to have to deal with real problems – which can be treated with a therapy with a mental health professional.

Why is alcohol so dangerous to mental health?

Alcohol is a central nervous system depressive drug, which gives it that anesthetic effect that makes people 'light'. It also acts by decreasing critical sense and inhibition. In larger amounts, it tends to dehydrate the body and strongly impairs sleep.

During a happy hour, for example, when you least notice, you have taken several doses of alcohol and do not even realize the harm that the same is doing to your body due to the jokes and conversations with friends that distract us from such evils.

Although after that drinking sleepiness comes, make no mistake that you will sleep for several hours and wake up again. Have you noticed that the next day you wake up extremely tired? Yes, alcohol impairs the quality of your sleep by up to 40%.

That is, although you sleep for a long time, your sleep is light and your body is not resting, but working to eliminate the toxic substance from your body.

Here's another risk factor for depression: poor quality sleep. Sleep is one of the fundamental pillars for the work of the whole organism, including mental health.

When it is impaired, both in quantity and quality, the probabilities of developing a depression can get much higher.

This is precisely why insomnia can lead to depression and not only the opposite as believed.

Depression and alcoholism are different diseases

Although alcoholism is often portrayed as a facet of depression, according to Dr. Hames Palhares*, the diagnosis of depression in alcoholic patients can be complicated.

In addition, only 6% of the cases in which alcoholic patients were in alcohol abstinence, symptoms similar to depression remained.

This means that alcohol dependence can generate symptoms that can be confused with depression, so the analysis of the professional should be judicious and the treatment of alcoholism come first.

In addition, the presence of alcohol is constant among suicidal people, which shows a delicate relationship between mental disorders and the abuse of substances such as alcohol.

Moderation and attention are the keys to better mental health

Next time you order your next glass, try doing an exercise with yourself: why am I asking for another dose? What i don't want to get in touch with right now? When was the last time I drank and how much did I drink?

Mental exercises like this will help you realize the amount of alcohol you eat and whether that is a warning factor.

So if you notice that you're abusing alcohol to get away from your problems, maybe it's time to face them and not let an addiction make your mental health situation worse.

If you know someone who often drinks frequently, give them a touch that a therapeutic process can be key to seeing a more sober and less blurry world.

* Dr. Hames Palhares is a Psychiatrist and Member of ABP - Brazilian Psychiatric Association