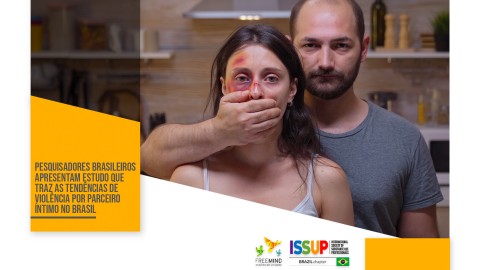 Intimate partner violence (IPV) is an important public health problem. According to the World Health Organization (WHO), the overall lifetime prevalence of IPV among women who have already had a partner is about 30%, ranging from 20 to 40% for different regions of the world. Compared to men victimized by IPV, women are more likely to have serious injuries. Important: more than 1 in 10 homicides are perpetrated by an intimate partner, and more than a third of female homicides are committed by partners.

Even though several studies have shown higher prevalence rates of domestic violence among Latin populations compared to other ethnic groups, only scarce data on the subject are available in Latin America. According to a recent WHO report, Brazil ranks seventh in female homicide rates among 84 countries in the world, surpassing most of its neighbors in South America except Colombia, all countries in Europe except Russia, and all African and Arab countries.

A 2012 national survey conducted by the Brazilian government revealed that more than 18% of the national female population reported having been the victim of IPV. More than half of Brazilian men reported having committed at least one violent act against their partners, although only 16% consider their behavior violent.

Finally, data from a survey conducted in large cities in Brazil revealed that 8.6% of the sample reported being victims of sexual violence by an intimate partner, especially women. In the first Brazilian Alcohol and Drug Survey (I LENAD), conducted in 2006, IPV was reported by over 10% of men and 15% of women in a nationally representative sample.

The new legislation entered into force in 2006, along with the first wave of The LENAD I. The II LENAD was held 6 years after the implementation of the Maria da Penha Law, providing the opportunity to evaluate trends in IPV in the country before and after the law is implemented.

Associations between domestic violence (IPV and/or child abuse) and several factors have been widely studied. There is consistent evidence showing higher rates of IPV among heavy drinkers and alcohol dependents. I LENAD confirmed the association between IPV and alcohol consumption. The use of other substances, such as various drugs, tobacco and hypnotics, is also often associated with IPV.

This study, led by Dr. Clarice Madruga, is authored by Elizabeth Z. Ally, Dr. Ronaldo Laranjeira, Maria C. Viana, Ilana Pinsky, Raul Caetano and Sandro Mitsuhiro and its objective was to examine IPV trends in Brazil, as well as to investigate the sociodemographic aspects predictors of IPV victimization and perpetration and possible associations of IPV with alcohol, tobacco and illegal substances.

In conclusion, the results obtained provided insights into the magnitude, trends and factors related to IPV in Brazil. This knowledge will be useful for the development of tailor-made interventions as well as evidence-based advocacy. The reduction in IPV rates, especially in terms of female victimization, suggests a positive impact of the recently implemented Maria da Penha Law, reinforcing the idea that targeted initiatives can have an impact on this issue. However, because of its gender-specific approach, specifically targeting cases of man-perpetrator vs. woman-victim, this initiative may have missed the opportunity to impact equally high rates of violence perpetrated by women. Finally, our results support the idea that efficient management of drug use issues in society can play a role in preventing domestic violence, especially IPV.