Mortality among a Cohort of Heavy Drinkers in Edinburgh & Glasgow 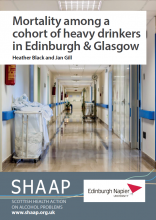 A new report on alcohol-related deaths amongst heavy drinkers in Edinburgh and Glasgow has been released by SHAAP based on research funded by Alcohol Research UK and the Chief Scientist Office (Scotland). The project explored the effects of alcohol on over 600 heavy drinkers across the two cities, of which 105 (16.4%) of the initial participants had died by the end of the study.

The study identified that those who had died had paid on average less per unit than survivors, with other associations with death including white cider, vodka, being a hospital inpatient and scoring high on an alcohol-related problems questionnaire. The most common underlying cause of death (46% of cases) linked to liver conditions, including hepatitis and hepatocarcinoma.

The report recommends further work to look into the needs of female heavy drinkers, particularly in Glasgow. Future research should focus on issues around mental health especially in the context of social service cuts and any changes impacting on the sale or availability of alcohol, particularly white cider and vodka.

By the end of the study, a total of 105 (16.4%) participants had died (mean age at death was 51.1 years). This report provides a descriptive overview of the drinking characteristics recorded at baseline interview for these deceased participants (Part A of the report). The information linked to the cause of their deaths is presented in Section B. Finally the baseline characteristics of the drinking behaviour of those who died is contrasted with that of the baseline characteristics of other, surviving, participants in Section C of the report. Membership of the surviving comparison group was restricted to ‘longer term surviving patients’ i.e. patients who survived to an age which exceeded the upper boundary of the 95% Confidence Interval of the mean age at death of the deceased patients. (In practice this meant that those within the long term surviving group had an age at entry to the study which was >53 years.)