Report on Drug Use in the Americas 2019, Executive Summary 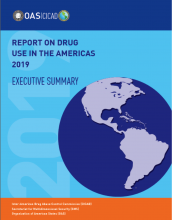 Drug use continues to represent a significant problem in the Americas, and one that challenges policy makers at the highest levels. The Inter-American Drug Abuse Control Commission (known by its Spanish language acronym, CICAD), of the Organization of American States (OAS), serves as the preeminent Western Hemisphere forum for policy discussion and hemispheric cooperation on drugs. Along with other responsibilities, the Executive Secretariat of CICAD supports OAS member states by providing an evidence-based picture of the drug problem, both nationally and at the hemispheric level, so that member states can design and implement policies and programs to address the problem.

The Report on Drug Use in the Americas 2019 analyzes current drug use data in the Hemisphere. It features information on the most widely used drugs across the region, organized by drug and by population group, and highlights emerging issues of interest to policy-makers and to the public. The Report draws on data obtained primarily through national surveys using the Inter-American Uniform Drug Use Data System (known by its Spanish language acronym, SIDUC), developed by the CICAD Executive Secretariat.