Behavioral Addiction Report 2020: Gambling with Money, Video Game Use and Compulsive Internet Use in Drug And Other Addiction Surveys in Spain EDADES and ESTUDES 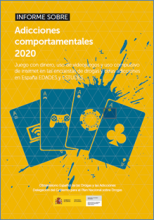 We live in increasingly dynamic and changing societies where new technologies are almost widespread in use. In this context, there is growing concern about the potential problematic use of the Internet, digital media and social media, as well as the role of new technologies as facilitators of access, or enhancers of other addictive behaviors, especially gambling and online gambling among adolescents.

It is the responsibility of all the institutions and entities involved and, ultimately, of the whole society to prevent misuse and possible problems arising from this powerful incursion into our social reality.

This need has been being answered from the National Drug Plan. Thus, the National Addiction Strategy 2017-2024 has incorporated as a new field in all lines of action addictions without substance or behavioural, with special emphasis on betting (presence or online) and addictions through new technologies, which are concreted in specific actions within their quadrennial action plans.

The Government Delegation for the National Drug Plan (DGPNSD), with the collaboration of communities and autonomous cities, conducted two regular national surveys: the Alcohol and Drugs Survey in Spain (EDADES) and the Survey on Drug Use in Secondary Education in Spain (ESTUDES),which were conducted in alternate years. ESTUDES began in 1994 and EDADES did so in 1995, currently counting for each of them with results from thirteen editions. Both surveys show the evolution of the prevalence of alcohol, tobacco, hypnosedants, opioid painkillers and psychoactive drugs of illegal trade, as well as other addictive behaviors.

Since 2014, a number of modules have been included in both surveys to understand the extent that compulsive internet use, money gambling and, since 2018/19, possible gambling disorder, have on the general population, as well as deepen behaviors related to these behaviors.

The results obtained in these modules are presented throughout this report.