Central Asia and the Caucuses

Monthly Newsletter March - 2019:
During this month, Drug Free Pakistan Foundation (DFPF) had organized mentorship sessions
for the members of music and drama society in University of Education Township and bank
road campus Lahore. These session were organized of several skills from music such as
Piano, guitar, harmonium, tabla and vocals, drama skills includes acting, script writing,
direction and production. Renowned mentors in this field were invited to enhance the existing
skills of students and also to guide them professionally about this field.

Mentorship Sessions @ Township Campus UOE - Week-1:
2 hours Mentorship sessions of Drama and Music kicked off with great fervor at UOE
Township Campus. Mentors trained the students on Acting Skills, Script Writing, Vocals and
Guitar. Renowned and prominent names in the Music and Drama Industry of Pakistan,
including Mr. Sarmad Khoosat, Mr. Faseeh Bari Khan, Mr. Zeeshan Ali and Mr. Musa Raza
were hired for these training sessions. The registrations for these sessions were manifold and
DFPF had to choose selective students for the same, based on their talent and flair. The
propagation of these sessions on social media made it a sensation amidst students.

Mentorship Sessions @ Bank Road (Female) Campus UOE - Week-1:
Analogous to Township Campus, the mentorship sessions also continued at Bank Road
Campus of UOE. The female students were eager to learn Music and Drama skills from the
maestros themselves. The students were trained on body-control, voice variations and
mirror-imaging in Acting whereas in Vocal Training they were taught about breath-control,
basic notes and beats. In script-writing sessions, students learned about story, character and
outline while in Guitar sessions they were taught about basic guitar features and standard
tuning. The trainings were greatly appreciated by students and they keenly participated in all
the sessions.

Mentorship sessions @ Township Campus UOE - Week-2:
Two mentorship sessions (Vocals and Script-writing) of 2 hours each were conducted on 9th
March, 2019 and 10th March, 2019 at Township Campus UOE. Students keenly participated in
these mentorship sessions. Mr. Zeeshan Ali (Vocals) coached 20 students with basic ragas
like Raag Yemen and latest Music Apps for pitch control and vocal practice. Mr. Faseeh Bari
Khan (Script Writing) instructed 21 students on developing characters, dialogues and
transitions. They also learned about plot development, screenplay, manuscript and using
archetypes. Mentee feedback was also taken on the learning outcome of these sessions. The
students greatly appreciated the opportunity provided to them by DFPF to be able to learn
such technical skills from the most acclaimed names in the profession.

Social Action Projects (SAPs):
Team DFPF, under the guidance of Mr. Atif Khan (Project Coordinator) effectively executed
the approved SAPs, during sports gala held from March 11 till March 13, 2019. These SAPs
included a Cultural Festival (Colors of Diversity), Folk Night (Transcend – Live Beyond the
Conceptual Sphere), a Musical Instrumental (SFS – Strings for Serenity) and The Blending
Booth. The outreach of these SAPs was around 8000 plus as students from all branches of
UOE, as far as Abbotabad, Multan etc. had been in attendance. However, the direct
beneficiaries of these SAPs were 2000 and the rest 6000 were indirect beneficiaries. The SAPs
were greatly successful as they provided the students with an opportunity to intermingle in a
relaxed environment and to rise above the likes of color, creed, race etc.

Mentorship sessions @ Township Campus UOE Week-3 :
A total of seven mentorship sessions were conducted on the Township Campus of UOE
between 18th to 21st March, 2019, which included 4 Music Sessions and 3 Drama Sessions.
In Piano sessions, the students learned about the types of pianos, its basic keys & scales and
elementary notes. In Direction sessions, they were enlightened about programming and
budgeting, script adaptation, working with playwrights and importance of auditions. In Script
Writing, they gained knowledge about character, act and scene labeling as well as plot
development. In Production sessions, they were instructed about the importance of props,
costumes and venue..

Mentorship sessions @ Bank Road (Female) Campus UOE Week-3:
A total of seven mentorship sessions were conducted on the Bank Road Campus of UOE
between 18th to 21st March, 2019, which included 4 Music Sessions and 3 Drama Session. In
Guitar Sessions, the students learned about the usage of fretboards, acoustics, strumming
and basics of electric guitar. In Script Writing sessions, students prepared impromptu scripts
and acted thereupon, focusing on dialogue formation. In Direction Session, they were
educated about research, creativity, teamwork and rehearsals.

Strategy Meeting with Student Societies:
A strategy meeting was conducted by DFPF Engagement Officer Sibt-e-Hasan on 21st March,
2019 at UOE Township Campus, with students of Drama and Music Society. The agenda of
this meeting was planning of the upcoming events as per project milestones and
restructuring the prevalent societies of UOE. Presidents of Music and Dramatic Society were
also present at the occasion and came up with ideas on how to manage the society’s
memberships and activities in a more organized and effective manner.

Mentorship sessions @ Township Campus UOE Week-4:
A total of six mentorship sessions were conducted on the Township Campus of UOE from
22ndto 28th March, 2019, which included 2 Music Session and 4 Drama Sessions. In Script
Writing sessions, the students were disbursed in groups and given the task to come up with
scripts on diverse topics, which were then reviewed and refined by the mentor. In Production
session, students learnt about the role-play of lighting, costumes, set-design and acoustics in
theatre. In Tabla sessions, they were enlightened on the history and formation of table, its
usage and legends in tabla history.

Mentorship sessions @ Bank Road (Female) Campus UOE Week-4:
A total of ten mentorship sessions were conducted on the Bank Road Campus of UOE from
22ndto 28thMarch, 2019, which included 5 Music Sessions and 5 Drama Sessions. In Tabla
Sessions, the students were taught about historical evolution of Tabla, the Arbab Gharana of
Tabla, the taals like Teen-Taal, Mughlai, Roopak, Dadra etc. and the norms of solo Tabla
performance including Tihai, Peshkash, Taali etc. In Production sessions, the students learned
about stage setting as per audience, sound-throw and intelligent lighting. They were also
edified on metaphoric representations of time, moods, environment etc. through props on
stage. Moreover, backstage management and stage cues/ terminologies were also imparted 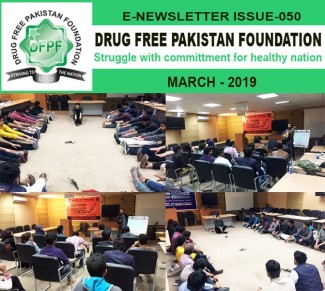