Central Asia and the Caucuses

During this month, Drug Free Pakistan Foundation (DFPF) had organized CVE training program for the hostel superintendents and faculty of University of Education, Lahore. DFPF field team from Lahore office also conducted interviews for the selection of cabinet for drama and music society of UOE, Township campus. After successful interviews, DFPF team announced a cabinet for both societies at township campus. Other activity detail are as follows:

A CVE training workshop for Hostel Superintendents was held on April 10, 2019 at University of Education, Township Campus, Lahore. The workshop was attended by 11 participants. The workshop started with opening remarks by Director Student Affairs (DSA) followed by an extensive training conducted by Mr. Sheheryar Warraich Khan on factors aggravating VE tendencies amidst boarding students and how hostel superintendents could foster constructive relationship with them to keep them engaged in positive activities especially after school-hours. The trainer also stressed that a sense of shared responsibility for safety and development should be created in students by their hostel supervisors and they should duly report any aggressive predispositions in students to the university management.

On April 17, 2019, a meeting was held with the members of Drama Society and Music Society of UOE, Township campus, during which students were asked to volunteer for becoming a member of the Society Cabinet. From amongst the interested candidates, interviews were held by Mr. Sibt-e-Hasan, Engagement Officer, to appoint the cabinet members on various posts including President, Vice President, General Secretary, Deputy General Secretary, Information Secretary, Deputy Information Secretary, Volunteers Secretary and Finance Secretary. After detailed interviews, students from both Drama and Music Society were assigned their cabinet roles, with the endorsement and approval of DSA Dr. Umer Saleem.

The Cabinet for Drama Society, UOE Township Campus is as follows:

The Cabinet for Music Society, UOE Township Campus is as follows:

The newly appointed cabinet members were welcomed on board and given a briefing on how to conduct the Society’s activities. Moreover, a layout of future activities of DFPF at UOE was also discussed with them and their suggestions for execution of the same were noted down. Also, a similar Cabinet Formation Activity is planned in the upcoming week in Bank Road (Female Campus), UOE.

DFPF Team continued student mobilization persistently both on social media and through one-on-one engagement. The students were guided on SAPs scripts and urged to play an active role in Cabinet Formation of their choice. The WhatsApp groups and Facebook groups of UOE students remained popping with queries and comments regarding both the mentioned activities. Student mobilization continued with students getting eager to be part of the Society Cabinets. Moreover, as SAPs planning continued in parallel, therefore many students came up with draft scripts. During this month, the students remained mobilized and on their toes for participating in DFPF activities and making their presence felt amidst their peers. Also, social media hype remained in full swing, causing more students to flock towards the Music and Drama Society, gaining their interest.

Ms. Farheen Naveed (CEO-DFPF) was interviewed during this month by leading news channels of Pakistan i.e. GEO Tv and GNN Tv on 17th and 22nd April, 2019 respectively. In these interviews Ms Farheen shared her story of struggle from early ages of her education and career. She shared the dilemma and hardship that she and her family faced because of her father’s drug addiction. She shared her motivation that made to pursue her career in the field of substance use treatment and prevention. She talked about the challenges and barriers that she faced while treatment of her father and after care process. 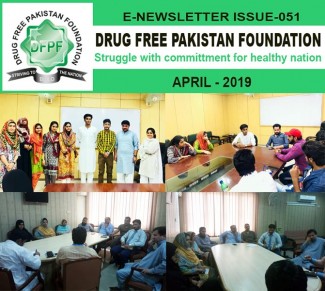