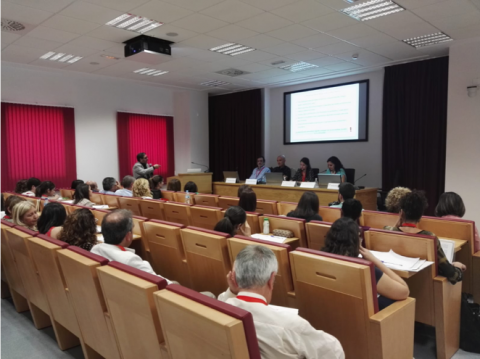 Almost 100 signed up and 70 posters were presented, both in face-to-face and virtual mode, highlighting the varied origin of the participants, coming from very different disciplines and places in Spain and counting with the presence of companions from Mexico.

During the conference, three interdisciplinary round tables took place, in which speakers from very different disciplines working on the problem of addictions participated, with contributions as valuable as those of Fernando Arenas (Deputy Director General of) Addictions of the Department of Equality and Social Policies of the Junta de Andalucía), Emiliano Martín (psychologist and former deputy director of the National Plan on Drugs), as well as international speakers from the University of Beira Interior (Portugal) and the Autonomous University of Nuevo León (Mexico), among others.

Moreover, it seems important to add the six simultaneous workshops in which participants were able to deepen their understanding in aspects such as emotional intelligence or the use of ICT among others, also dedicating to the workshop to the scientific publications taught by Pilar Sáiz Martínez, editor-in-chief of the magazine of impact "Addictions". In addition, between all the presented work, the prize was awarded with a value of 100 euros and a diploma of special mention for the best scientific poster presented by Ms. Rocío Illanes entitled "Methodology for capturing young people with high vulnerability to the" "consumption of addictive substances from the associative movement of Seville", that, using a qualitative methodology, valued the response of the participants to the methodology of raising awareness of young people in leisure and youth meeting spaces: the street and the open environment.

Accompanying the scientific program, coinciding with the celebration of the Year Murillo in the city of Seville, there was a guided tour of the Temple of Santa María Blanca, one of the artistic gems of the city, which also houses original works and replicas of the audience painter, and that during this year is one of the neuralgic points of the Itinerary Murillo. And then there was a dinner in which, in a relaxed atmosphere, the attendees could continue sharing experiences.

We hope we have achieved our goal and that the attendees have enjoyed these days and we invite them to future editions, in which we hope to improve based on the lessons learned.

President of the Scientific Committee

President of the Organizing Committee