An Outcome Evaluation of Drug Treatment in Afghanistan 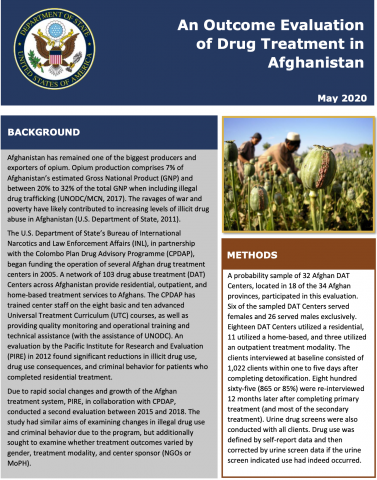 Afghanistan has remained one of the biggest producers and exporters of opium. Opium production comprises 7% of Afghanistan’s estimated Gross National Product (GNP) and between 20% to 32% of the total GNP when including illegal drug trafficking (UNODC/MCN, 2017). The ravages of war and poverty have likely contributed to increasing levels of illicit drug abuse in Afghanistan (U.S. Department of State, 2011).

The U.S. Department of State’s Bureau of International Narcotics and Law Enforcement Affairs (INL), in partnership with the Colombo Plan Drug Advisory Programme (CPDAP), began funding the operation of several Afghan drug treatment centers in 2005. A network of 103 drug abuse treatment (DAT) Centers across Afghanistan provide residential, outpatient, and home-based treatment services to Afghans. The CPDAP has trained center staff on the eight basic and ten advanced Universal Treatment Curriculum (UTC) courses, as well as providing quality monitoring and operational training and technical assistance (with the assistance of UNODC). An evaluation by the Pacific Institute for Research and Evaluation (PIRE) in 2012 found significant reductions in illicit drug use, drug use consequences, and criminal behavior for patients who completed residential treatment.

Due to rapid social changes and growth of the Afghan treatment system, PIRE, in collaboration with CPDAP, conducted a second evaluation between 2015 and 2018. The study had similar aims of examining changes in illegal drug use and criminal behavior due to the program, but additionally sought to examine whether treatment outcomes varied by gender, treatment modality, and center sponsor (NGOs or MoPH).

A probability sample of 32 Afghan DAT Centers, located in 18 of the 34 Afghan provinces, participated in this evaluation. Six of the sampled DAT Centers served females and 26 served males exclusively. Eighteen DAT Centers utilized a residential, 11 utilized a home-based, and three utilized an outpatient treatment modality. The clients interviewed at baseline consisted of 1,022 clients within one to five days after completing detoxification. Eight hundred sixty-five (865 or 85%) were re-interviewed 12 months later after completing primary treatment (and most of the secondary treatment). Urine drug screens were also conducted with all clients. Drug use was defined by self-report data and then corrected by urine screen data if the urine screen indicated use had indeed occurred.

There were substantial declines in illicit substance, including opioids and methamphetamines, one year following treatment. These effects were presumably due to the UTC treatment received by clients.

The results of the Afghanistan drug abuse treatment evaluation show positive change (i.e. statistically significant reductions) in illegal drug use and criminal behavior. Our results suggest that although the reductions in illegal drug tended to be larger for women than men, both genders showed large decreases in drug use. Meaningful reductions in substance use occurred in all three treatment modalities (residential, outpatient, and home-based). The differences in treatment modality tended to favor inpatient treatment but were similar overall. Based on the foregoing, we make the following recommendations.