Drink in moderation. A non-preventive message

Drink in moderation. A healthy, well-meaning and responsible advice, transmitted by the alcoholic beverage industry in all its advertisements, aimed at preventing the problems of excessive alcohol consumption. Right?

The first time I stopped to reflect on this was in my master's research in which most 15-year-old students agreed with the statement "it's okay for someone my age to drink as long as they know when to stop".

I wondered where this idea came from, since everyone knows that the consumption of alcoholic beverages is prohibited for children under 18 years and that this is not by chance. Science has known for a long time that the brain is developing until about 21 years of age and that the sooner there is contact with psychoactive substances such as alcohol, the greater the likelihood of damage and the development of future problems.

That's when it occurred to me that this perception of the students was related to the fact that they absorbed the message of beer advertisements rightly: it's okay to drink, as long as it's in moderation.

Let us take a closer look at this message. The verb drinking is conjugated in the imperative: drink. An order. Just missed completing: drink in moderation, but drink. A message perfectly inserted in our alcoholic culture (and promoting it) in which alcohol consumption is given as a certain, unquestionable fact.

Is this supposed preventive warning not a subtle message that is part of advertising aimed at stimulating consumption?

The best advice that the industry gives to its public, in order to prevent problems with alcohol excesses, does not even consider the possibility of not drinking. If you considered this possibility, your preventative message would probably take a different form: "if you drink, be moderate", "do not drink if you do not know how to have sober fun", "not drinking is the only safe way to have fun", "drinking excessively can prevent you from enjoying good times",and how many more warnings creativity can create considering the possibility of not drinking.

But no, according to the industry, it is necessary to drink. For her goals, it is important that young audiences receive the message so that they drink moderately, because this is the best way to get around the "radical orientation" of not drinking before 18, which is not at all interesting for business.

But isn't the beer advertising audience an adult?

I remember controversial advertisements from the beer industry (which were banned) clearly directed at children, through mascots and animations. The sooner there is brand identification and consumption, the greater the chances of having a loyal customer in the long run. And wouldn't that be exactly the goal of the alcohol industry: to increase the number of customers who are faithful throughout their lives? So the younger the audience is hit, the better.

Therefore, advertisements are expected to address (in)directly to the young audience. Elements such as irreverence, fun contexts, groups of friends, humor, puns, among others, make it easier for young people to identify themselves with the situation presented in advertising and with the consequent consumption of alcohol. Until you come to the natural and subconscious conclusion that the message "drink in moderation" is meant for him.

Perhaps this "healthy, well-meaning, and responsible" advice contributes to young people's perception that it's okay to drink before they're of age, "as long as it's in moderation." And once again it seems that the dollar sign speaks louder than any real concern for prevention and social welfare. Unfortunately.

* Text written by Raphael Masters and published in: 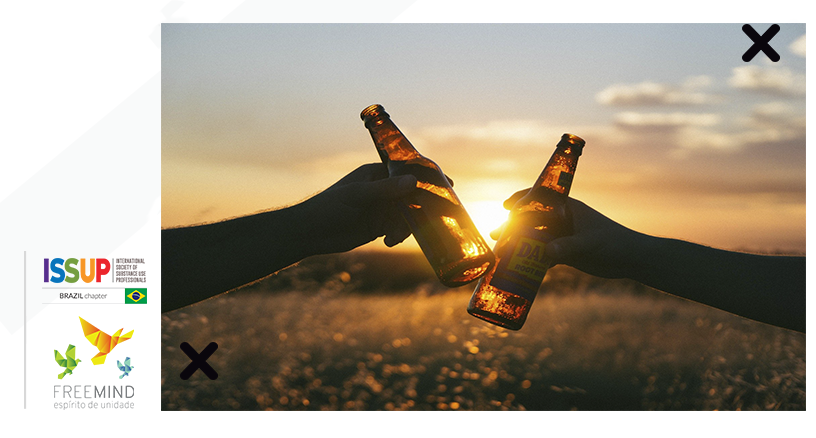