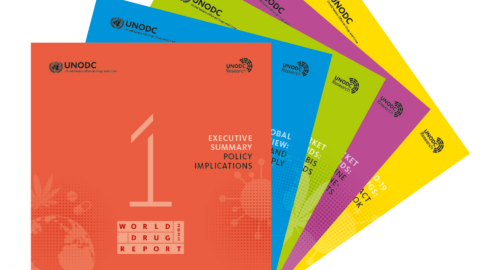 Around 275 million people used drugs worldwide in the last year, while over 36 million people suffered from drug use disorders, according to the 2021 World Drug Report, released today by the United Nations Office on Drugs and Crime (UNODC).

The report is published against a background of rising drug usage trends globally. Between 2010-2019 the number of people using drugs increased by 22 per cent, owing in part to global population growth. Based on demographic changes alone, current projections suggest an 11 per cent rise in the number of people who use drugs globally by 2030.

According to the latest global estimates, about 5.5 per cent of the global population aged between 15 and 64 years have used drugs at least once in the past year, while 36.3 million people, or 13 per cent of the total number of persons who use drugs, suffer from drug use disorders.

On drug demand, the report estimates that differences between men and women in the extent of drug use may play a critical role in changes in the projected number of people who use drugs in developing countries, including in Africa. The population most at risk of using drugs, young people aged 15–34, is projected to grow in the next decade, in particular in low-income countries experiencing increased urbanisation.

Opioids continue to account for the largest burden of disease attributed to drug use. Reducing the health burden of opioids requires a significant scale-up of evidence-based interventions to deal with opioid use disorders, especially opioid agonist treatment and prevention of overdose and management of overdose cases.

The two pharmaceutical opioids most commonly used to treat people with opioid use disorders, methadone and buprenorphine, have become increasingly accessible over the past two decades. The amount available for medical use has increased six-fold since 1999, from 557 million daily doses to 3,317 million by 2019, indicating that science-based pharmacological treatment is more available now than in the past.

Cannabis: Low perceptions of risk and higher rates of usage amongst young people

The report identifies a substantial disconnect between real risks and public perception on cannabis. In some parts of the world for example, cannabis products have almost quadrupled in potency, and yet the percentage of adolescents who perceive cannabis as harmful has dropped by as much as 40 per cent, despite the evidence linking regular use to health problems, particularly in young people, and despite the correlation between potency and harm.

As a result of its projected population growth and relatively young population, Africa is likely to be particularly vulnerable to an increase in the number of people who use drugs by 2030 (by as much as 40 per cent). Although a rise in people who use drugs is predicted across the world, it is likely to be particularly pronounced in Africa because the population is younger, and drug use is higher among young people than among older people.

The report recommends an effective continental response, involving massive investment in health and an expansion of evidence-based prevention programmes, particularly those focusing on family skills, life skills in school and youth participation at the community level. High-quality pharmacological and psychosocial services are also needed.

Burden of disease remains high among people who inject drugs

There were more than 11 million people globally who inject drugs in 2019, of whom 1.4 million are living with HIV and 5.6 million with hepatitis C. Almost 1.2 million people live with both. The report recommends strengthening the provision of comprehensive hepatitis C and HIV prevention, treatment and care, especially among people who use drugs in prisons and closed settings.

New risks and opportunities created by the pandemic

The report highlights how COVID-19 has triggered innovation and adaptation in drug prevention and treatment services through more flexible models of service delivery. Many countries have introduced or expanded telemedicine services due to the pandemic, which for drug users means that healthcare workers can now offer counselling or initial assessments over the telephone and use electronic systems to prescribe controlled substances.

While the impact of COVID-19 on drug challenges is not yet fully known, analysis in the report suggests that the pandemic has brought increasing economic hardship that is likely to make illicit drug cultivation more appealing to fragile rural communities. The social impact of the pandemic – driving a rise in inequality, poverty, and mental health conditions particularly among already vulnerable populations – represent factors that could push more people into drug use.

The 2021 World Drug Report provides a global overview of the supply and demand of opiates, cocaine, cannabis, amphetamine-type stimulants and new psychoactive substances (NPS), as well as their impact on health, taking into account the possible effects of the COVID-19 pandemic. The Report and further content is available here. The Executive Summary / Policy implications booklet is available at: https://www.unodc.org/res/wdr2021/field/WDR21_Booklet_1.pdf